Blog
You are here: Home1 / Blog2 / culture and tradition3 / POURING OPPROBRIUM ON PUTIN 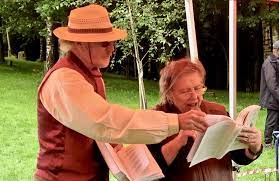 The Pegasus evenings at the Flying Horse in Rochdale resumed in February but I could not go to that session. However I did go to the March session held last evening There was a derby match between two obscure Manchester football teams on the tv Sky football channels at the same time which may have lowered numbers at the poetry event- However regulars like Val and Alfie were there, Ken Hall, Ken Eaton Dykes and daughter, Ian Aitcheson etc and the local ukulele band were also out in force.

Robin Parker gave a good rendition of his parody of a Boney M song with its chorus Go Go Go Putin, Russia’s greatest kill machine (or something like that) which was very clever. However, Susan tells me she is sure the chorus was No No No Putin, which would certainly make more sense.

I sang a medieval song of Lenten fasting and sorrowing of which there are only two versus plus one written by me. Secondly I sang one of my own songs The Looking Glass, about my teenage school friend Isabel.

Ken Hall read a good put-down of people holding two hour conversations on a crowded train and then getting off just before the irate husband at the end could finish his story.

photo 2 seamus Ian read his recent Rochdale Observer limerick on  Pancakes. and Eileen Earnshaw (shown on cover and at top of this article with the author) read some of the poetry produced by attendees at her new Falinge Writing Group, which has just published a book. At their most recent meeting, which I attended, each table of members was given a haiku written by one of Rochdale´s finest poets. Seamus Kelly (shown right with our editor) .

Alas they were taken away before I could think to keep a copy, but I can report that it was about Putin’s tanks clanking today but threatening tomorrow. It was a very cold evening considering we have been having mild weather lately, but the chill somehow seemed appropriate in the current scary circumstances. Will the man on the left relent ?

The Nearly Dead Poets arrived late at the Flying Horse due to bus issues. Des Lexic, or Tony or whatever his new name is, did a very good rendition of his ‘Oh Henry’ chant celebrating Henry VIII’s wives. He also did his own twelve bar blues rendition of a song with a repeat line of ‘I´m p-i-s-s-e-d.’  The other half of The Dead Poets, the artist formerly likened to Alvin Stardust but who now goes by a blues singer type name, never arrived. Presumably due to more missing busses. It’s a long, long way to  Bolton-Bury….It’s a long way I know.

Last Saturday Susan and I went to hear Sid Calderbank, one of the best known dialect speakers in the North, giving  his talk on the Cotton Famine at The Co-op Store in Toad Lane.

I have not been to any other venues. I shall, however, be present at  a  proposed gathering later in the month and at the Sam Bamford do in April. That is I hope I am as no one has contacted me recently.

Samuel Bamford (28 February 1788 – 13 April 1872), was an English radical reformer and writer born in Middleton. He wrote in and on the subject of Lancashire English dialect. In August 1819, he led a group from Middleton to St Peter’s Fields, Manchester for a meeting that pressed for parliamentary reform and repeal of the Corn Laws. There they witnessed the Peterloo Massacre, and Bamford was arrested, charged with treason and sentenced to a year in Lincoln prison.

A new walkers´ trail trail aims to give an impression of the Middleton which Sam knew. It draws attention to some of the buildings which Sam would know and recognise today and to some of the events in his life connected with those buildings.

Although the trail is almost all on paved surfaces, the centre of Middleton around the church is built on a hill. This means that there are several slopes. There are also cobbled sections. The walk is therefore not rated as accessible for wheelchair users and those with pushchairs.

The walk shown in the publicity leaflet finishes at the Olde Boar’s Head pub. To work out how to get to and from the walk start point, simply click the Google Maps link shown on thed leaflet. Then click ‘Directions’ and enter your postcode or location in the relevant field. For public transport options, click the train icon.

Alternatively, input the postcode shown into the TFGM journey planner at https://my.tfgm.com/#/planner/

Received a lovely calendar from Austrian friends today showing Tyrol of yesteryear on one sepia page side with the colour moderns on the other. It is two years since I spoke any German or visited these places and I will have to think hard to dredge up the words for a thank you letter. When one speaks to others in the flesh is is easy to find the words no matter how not quite right the grammar or pronunciation might be. But when one writes one must always strive for correctness.

Perhaps subconsciously stirred by the desperate situation in Ukraine I am starting  Mein Kampf, allegedly written by young Adolf, in quite bad German – a birthday present- and Volker Ulrich’s biography of Hitler. Hitler hated writing but loved speaking. But I always find that reading the Brothers Grimm is much easier going when trying to get back into the language.

As for Hitler I only have a Royal Navy signalman’s son’s interest and not a morbid or fanatical one. I also have many books on Napoleon and the Napoleonic wars but I am no Nap-lover. Ulrich’s book asks the intriguing question:  What would have happened if Hitler had been accepted by the Vienna Fine Arts Academy instead of being rejected and driven to living on the streets and painting postcards to sell. Hitler spends a lot of Mein Kampf complaining about the boorish arts establishment frustrating his genius. When he went to live in Munich just before the Great War broke out he made a good living it seems by painting postcards and lived a lower middle class life till he joined the Bavarian Reserve regiment and found his true calling in wearing uniforms and orating.

I recently wrote a parody of  the Downing Street Party-gate saga based on Leslie Gore’s It’s My Party And I’ll cry I Want To but as I could not go to February’s Pegasus session it’s message has been lost in the tide or war in Ukraine.

To be honest I find it hard to write about that in any accessible way and I envy Robin Parker his quick wit, lightness of touch and gift of the gab.

This week on the Hot Biscuits jazz show features extracts from a live set at Creative Space from the Phil Shotton Quartet. Tracks also from Ben Crosland‘s Quintet, Tim Garland & Jason Rebello, Kevin Figes Quartet and Tumultuous Tantrums. If this sounds interesting share the word and tune in 24/7 for our new weekly shows starting Mondays at www.mixcloud.com/stevebewick/

Exclusive interview for Sidetracks And Detours: delivering APPLIED ARTS with...