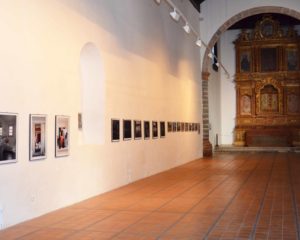 Through their fourteen-artist ensemble of vocalists, musicians and performers of modern dance, Skin With Skin, through closeness, intimacy and communion, sought to reach out to their audience at Convento des Santo Domingo, in Teguise. In doing so they achieved a long-held ambition, ´with the help of the spell exercised on the soul by music´ of combining in the form of this intimate concert, a selection of the music they perform in their three inter-disciplinary shows : I Sing To Work, Ángaro and Tarasca.

Those who attended were presented with a truly magical night in which these artists shed stage characterisations and simply showed themselves through a heart-felt simplicity in the spirit of human kindness.

In PIEL CON PIEL (Skin With Skin)  the music strips off the scene and the movement and, thus, the ins and outs and the germs of showmanship, enabling them to tell their story  ´through closeness, intimacy and communion with the public´.

Thus, under the ensemble´s parasol of innovation and modernity that characterizes Skin With Skin, the Teguise audience heard songs such as Canto de lavanderas, Trigo tostado, Danza del Trigo, El velorio de los angelitos, Seguidillas manadas, Tindaya and La Meda, in a show that was led by outstanding and extraordinary percussion and the extraordinary voices of its singers, all supported exquisitely  by violins,  piano, double bass, flute, horn and flugelhorn.

For this year´s Festival tour of the Archipelago, Skin With Skin also enjoys the collaboration of Paloma Hurtado and Daniel Morales. These dancers are renowned representatives of contemporary dance throughout The Canary Islands and are endorsed by numerous awards and prizes

For these exponents, the universe of contemporary dance is established as the basis of a style that they have forged, to define itself more and more as its own and particular language. They portray a constant contrast between strength and fragility and hardness and harmony. All that was so evident in this concert tonight, shown in each of the works, in which there is an evident yearning to touch, move, and affect, in some way, the audience, making tonight´s gatherring an active participant in the moment, shedding light to illuminate realities.

We and our friends, Iain and Margaret, with us in this audience, were surely not the only ones present to feel a sense of high-lighted self awareness as the communication from the stage pierced our protective skin and touched our heart.

Dancers and musicians alike showed how contemporary dance has become a universal language that has become established as the basis for discussion. to illuminate realities, so each one of us will become more self-aware in our own way.

Such discussions between artists and audience are spoken in a physical language, loaded with content that moves away from virtuosity, leaving it to the body itself and its truth that weaves the form of these works. The ensemble´s vision focuses on the transmission of thoughts, sensations and experiences that everyone can recognize.

The 38th Canary Islands Music Festival will see them re-create this amazing adventure, on the stages of seven islands as  ‘Piel con piel’, a paints a novel scenic proposal that unites avant-garde and tradition through contemporary music and dance.

The tour began on Saturday 15th at the Guiniguada Theater in Las Palmas de Gran Canaria, and continued the following day at the La Granja Space, in Santa Cruz de Tenerife.

It was on Tuesday 18th that we saw them at the Convent of Santo Domingo de Teguise, (right) and as I write this review, they are probably on a ferry over to Feurtaventura  to play tonight, Wednesday 19th January at the Casa de los Coroneles, in La Oliva. The next stop will be in the Plaza de Montserrat de Los Sauces, in La Palma on Friday 21st followed by an appearance at the Auditorium of San Sebastián de La Gomera, on Sunday 23rd. Their tour, as part of the annual Classical Music Festival, will conclude outside the Centro Cultural de Frontera, in El Hierro, on Tuesday, January 25th.

I was certainly absolutely spellbound throughout this new show, performed under the artistic direction of Jonatan Rodríguez and the stage direction of Oswaldo Bordón.

We had begun the evening in the restaurant Tahona, (left) next door to the convent turned theatre and art exhibition space that we have mentioned before on these pages in our article Concerts In Caves And Convents, published in the pre-pandemic days of February 2020.

In between having a laugh with a young waiter who brought out more than enough wrinkled potatoes to feed a regiment, (our fault, we had wrongly ordered), we reminisced about some of the previous concerts we had all seen at this historic venue. This included Nordic Voices, a concert I never thought I would see equalled on Lanzarote, but I did tonight !

We eventually enjoyed a good tapas spread, served by the same waiter, who I´m sure was beginning to think of us as ´more crazy English´. He didn´t seem able to believe it when I ordered a bowl of canarian potatoes as a starter for what turned out to be a delicious potato and chic pea stew, (although it turned out I had ordered several rather than one). The waiter grinned with every course he delivered to me and muttered something friendly and witty (I hope) in Spanish. The food was great, and we brought the over-ordered potatoes home with us, so it looks as if I am going to be eating potato salad for weeks as a punishment.

The waiter and I parted on good terms, though, and he beamed happily as I bought a cd from some I thought were on sale, but were actually for the restaurant´s sound system ! Good Lanzarotan folk lore, though, so we swapped a tenner (euro) for twelve tracks in amicable agreement. (right)

On the short (fifty yard) walk to the front door of the Convent we wondered, after all those previous great gigs in the same place, what we would be seeing and hearing tonight.

An hour and forty minutes later we filed out of the venue to walk across the road to where Iain had parked the car.

On that short walk he opened the conversation by saying,´ ´Ï´m not sure what I have just seen and heard.´

Like Wordsworth´, I chose not to speak with emotion but to later recollect in tranquillity.

What we had seen was modern dance of the kind that UK ensembles like Can´t Dance Can and Dance United Yorkshire also seek to provide. The two wonderful dancers here on Lanzarote evoked memories for me of how dancers (in those UK groups) like Catherine Wilkes, Margaret Greenwood, Lucy Fleet, Clare Fildes and Romina Thornton (all of whom are, as I write, twittering about a modern dance workshop event scheduled at The Lowry in Manchester UK) could so elegantly and thoughtfully (and thoughtlessly, too, for that is surely an aim) lose themselves in the moment whilst dancing.

The partnership of Skin With Skin here on Lanzarote was elegant, graceful and dynamic, inspired by, rather than simply being a literal reflection of, the lyrics and music. What we had seen were stringed percussive and keyboard instruments and two dancers who danced ´never together but close sometimes´ with grace and athletic ability who somehow always made me feel I was watching the twists and turns of their mind (and soul) rather than their bodies, that were both at one with the music.

As for what we had heard: Well, Iain followed up his own question by saying he felt he had at some points been listening to Navajo Indians, particularly in the music that immediately followed what Margaret thought (probably rightly) was the reading of a poem. I certainly agreed with Iain, and had thought there were Native American sounds slipping in and out of the performance, but then I could also hear Cajun and Celtic influences that set me in mind of Beausoliel and The Chieftains. I could hear echoes, too, of Novia Scotian music and The Rankin Family and the drip-drip, drop of the Amazon Rainforest as brought to us by Dreamcatcher. And it sounded like Bela Flec had just walked past, and although I missed him, I´m sure my son, who is a big fan, would have noticed him.

What we heard were ghostly, angelic sounds that whilst seemingly as ancient as Time would be well served by the classification of New Age music.

These songs, though, were actually all drawn from The Canary Islands and you would be right to shout ´so much for the fanciful notions of the reviewer!´

That I allowed my imagination to run away with me, however, is surely the moot point. I think the purpose of the material and style of the playing and performing by PielConPiel (Skin With Skin) is designed to encourage and  generate such imaginings.

This evening had been more than a mere performance, though, as it had also taken on a resemblance to a workshop as we were given explanatory soliloquys, urging us to make ´notes to self´. The notes I made included phrases like ´must see more of this´ and I wonder how this would be received by those dance organisations my wife and I used to work with when we lived in the UK. I was reminded not only of Margaret Greenwood dancing to a poem of mine called So Have I, and a night when my own group of Just Poets put on a music and dance show with Can´t Dance Can (nee SpiralDance) on the theme of homelessness, but also countless uplifting SpiralDance annual showcases, showing how dance and music benefit the community.

HOW WE MAKE THE GREATEST HITS