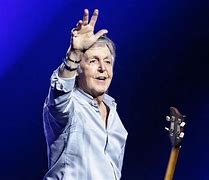 One of Paul McCartney´s most famous compositions, considered to be one of the greatest pop songs of the 20th Century, Yesterday had fairly humble beginnings. It came to Paul (shown in our cover photograph and top of page) in a dream. He was then convinced the tune must already exist.

´When I woke up, I thought, ‘I love that tune, what is it? Is it Fred Astaire? Is it Cole Porter? What is it´?

He asked John Lennon, George Martin and the singer Alma Cogan to name that tune. But no one recognised it. Happy that it was an original number, he added some curious dummy lyrics.

“Scrambled eggs, Oh my baby how I love your legs.”

The actual lyrics, Paul reveals, were written on a hot, dusty taxi ride though the Portuguese countryside during a holiday with Jane Asher. When it came to recording the song, none of the other Beatles felt they had anything they could add to it, so it became notable for being the first recording to only feature one Beatle.

The sweetness and simplicity of the song and the recording have made it iconic. But it could have been very different.

´I was very intrigued by the work of Delia Derbyshire (left). She was a pioneer of electronic music, who worked for the BBC Radiophonic Workshop and is probably best known for her work on Doctor Who. I went to see Delia and she took me to a hut she had in the garden. A sort of laboratory. And we talked about how she worked´.

But Paul’s vision of an avant-garde electronic rendering of the song was abandoned in favour of the version we now know and love.

Another classic Beatles tune that showcased Paul’s growing confidence as a songwriter. He was inspired by the tales he heard from an old lady he used to help when he was a Scout.

´Eleanor Rigby is based on an old lady that I got to know very well. I don’t even know how I first met Eleanor Rigby, but I would go around to her house. I found out she lived on her own, so I’d go there and just chat. Just hearing her stories enriched my soul and influenced the songs I would later write´.

While Paul had the theme and the atmosphere for the song, adding the names was the tricky part. Miss Rigby was initially called Daisy Hawkins. But it wasn’t quite right.

´My memory has me visiting Bristol where Jane Asher was playing at the Old Vic. I was wandering around waiting for the play to finish and saw a shop sign that read ‘Rigby’. And I thought, that’s it!´

The Eleanor part was added due to Paul’s fondness towards the actress Eleanor Bron (right) who appeared in the film Help! and, possibly, dated John Lennon for a spell.

With the lyrics in place, it came time to record the track. Paul envisioned the song incorporating a string quartet. He took the idea to George Martin who felt the strings needed an added dash of Bernard Herrmann, the film composer who had composed the memorable soundtrack to the film Psycho.

´George wanted to bring some of that drama into the arrangement. And of course, there’s some kind of madcap connection between Eleanor Rigby, an elderly woman left high and dry, and the mummified mother in Psycho´.

Speaking of Got To Get You Into My Life, McCartney surprisingly says, ´So this song is my ode to pot´.

Paul has previously been pretty candid about the inspiration for this Beatles banger.

´What we had to get into our lives, it seems, is marijuana. Until we happened upon marijuana, we’d been drinking men. We were introduced to grass when we were in the US. And it blew our tiny little minds´.

Perhaps what’s less well known is that The Beatles’ introduction to pot came from an esteemed source.

´We were in a hotel suite, maybe in New York, around the summer of ’64. And Bob Dylan turned up. And we were just drinking as usual, having a little party. And Bob (left) had disappeared into a back room. And then Ringo came out of that room looking a bit strange. He said, ‘I’ve just been with Bob and he’s got some pot.’ We said, ‘What’s it like?’ And he said, ‘The ceiling is sort of moving.’ And that was enough.´

Paul, and the other Beatles, became enthusiastic advocates for the drug, at least for a time. The initial euphoria later turned into darker drug experiences for members of the band. But at the time, it was a definite source of lyrical inspiration.

´It was something that entered our lives and I thought it would be a good idea to write a song´.

The Beatles’ split in the early 1970s was acrimonious to say the least. And, as songwriters, feelings were shared and expressed via tracks featuring varying degrees of vitriol.

´John was firing missiles at me with his songs. One or two of them were quite cruel. I don’t know what he hoped to gain other than punching me in the face. The whole thing really annoyed me´.

The main reasons behind the acrimony were money, business, and personality clashes.

´I’d been able to accept Yoko (right) in the studio, sitting on a blanket in front of my amp. I’d worked hard to come to terms with that. But when we broke up and everyone was flailing around, John turned nasty. I don’t really understand why. Maybe because we grew up in Liverpool where it was always good to get in the first punch. I got fed up of being told what to do, so I wrote this song´.

Tracks such as Lennon’s How Do You Sleep? were slightly more explicit than Paul’s attempt at retaliation, which featured on his solo album Ram.

´I decided to turn my missiles on him. But I’m not really that kind of writer. So it was quite veiled. The first verse and the chorus are pretty much all the anger I could muster. But my heart wasn’t really in it. It’s a fairly upbeat song. It doesn’t sound that vitriolic´.

Though the song is opaque and fairly cheery, the message behind it was pretty blunt, as Paul indicates: “F**k you, John.”

McCartney also reveals that Here Today is ´A love song to John, written very shortly after he died´.

One of Paul’s most poignant songs concerns loss and things that were never said, aimed directly at his friend who was murdered in 1980.

´I was remembering things about my relationship with John (left) and the million things we’d done together. From just being in each other’s front parlours to walking on the street together. Long journeys together that had nothing to do with The Beatles´.

Paul wrote the song alone in a sparse room that would eventually become his Sussex recording studio.

´It was very emotional writing this song. I was just sitting there in this little bare room thinking of John and realising I’d lost him. And it was a powerful loss. So, to have a conversation with him, in a song, was some form of solace.

I found this really nice chord. That was the dock, and I could push the boat out and finish the song´.

As well as being a tribute to his fallen friend, the song also confronts the emotional barriers that men of a certain age find themselves fighting.

´Why can’t men say, ‘I love you’ to each other? I don’t think that’s as true now as it was back in the 1950s and ’60s, but certainly when we were growing up you would have to be gay for a man to say that to another man. So that blinkered attitude bred a little bit of cynicism. If you were talking about anything soppy someone would have to make a joke of it´.

And even after 40 years, the song still means a massive amount to McCartney.

´It’s a very charged experience to perform this song in concert. Just me and the guitar. In the middle of a big arena with all these people. And a lot of them are crying. It’s always a very sentimental, nostalgic, emotional moment.´

These are just a few tracks as a sample of a series that presents a much bigger picture and will be well worth checking out on BBC Sounds.

LORD, DON´T STOP THE CARNIVAL, AND LET THE MUSIC PLAY