Blog
You are here: Home1 / Blog2 / Music3 / STUCK IN THE MIDDLE with Larry Yaskiel 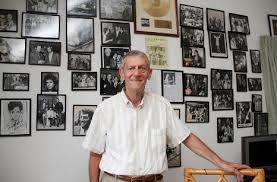 STUCK IN THE MIDDLE with Larry Yaskiel

At the time it felt like the whole world knew that chorus. The words of that chorus we all snag along to, and the lines of the verses, too, of Stuck In The Middle With You were prompted by a dinner party celebrating the signing of Stealers Wheel, the band who recorded the album, to A & M Record which coincided with a visit to London of A&M owner Jerry Moss (left) who wanted to meet his label’s new group.

I learned all this from Larry Yaskiel (right) when he and I and our good ladies met up for some coffee, cake and conversation at the gentile and civilised Café de la Plaza in Peurto Calero. Back in the day when pop music mattered and seemed more virile than it does these days, Larry was a label executive at A&M and he told me during a laid back chat that he pretty much organised a dinner-meeting between Stealers Wheel and Jerry Moss.

´So I hosted a dinner at Arethusa’s Restaurant in the King’s Road, Chelsea´, he told me, ´and I invited the duo and their managers, Robert Wace (former manager of The Kinks) and Ray Williams (who had introduced Elton John and Bernie Taupin to one another) who also brought along Gus Dudgeon, Elton John’s producer as a possible candidate to produce the album. In all, twenty guests were seated on opposite sides of a long table. I had placed Stealers Wheel, that is Gerry Rafferty, in the centre with his co-writer and singer, Joe Egan (left) opposite. The two of them spent the entire evening wrapped up in an intense conversation as if they were two brothers who had been separated as kids and hadn’t seen each other for twenty-five years. in fact, of course,  they spent almost every day writing songs together.

What I did not know was that Gerry was extremely shy, and what was going on around him was anathema to him. In his mind he divided the guests into two camps, the ‘music,’ i.e. him and Joe, and the ‘business’ i.e. everyone else. And to crown it all, as guest of honour, Gerry was seated plumb in the middle with nowhere to hide. So he hid, so to speak, behind the mantle of a “do not disturb” conversation, to the exclusion of everyone else at the table. That’s what “stuck in the middle with you” was all about, I had stuck him there “with clowns to the left of me and jokers to the right.” On top of it, I was the joker on his right! Songwriters often use such experiences as the basis for a song. Rafferty was taking the micky out of the whole evening and recorded the laid-back vocal with a Dylan-like raspy vocal.

Another example of how much he shunned the limelight was when he refused to go on Top of The Pops with Stuck In the Middle With You and the vocal was sung by Joe Egan. He also refused to tour with Stealers Wheel when their managers got them booked as the opening act on the David Bowie Ziggy and the Spiders from Mars tour of the UK, the biggest ticket seller of the year!

Shortly after I had signed the band, I was having a drink with Gerry in a pub in Scotland where he was in the company of large group of local folk singers who were all going to a wedding the next day. I asked him if he felt that he had in some way ‘betrayed’ his fellow folkies by ‘going commercial.’ He turned to me and said, ‘there’s not a single person in this room who wouldn’t plug-in in exchange for a recording contract.’

The minute I heard the completed “Stuck In The Middle With You” in the studio I said, that’s a hit single that will go to the top of the charts in both England and America! Nobody was more amazed than Gerry who told me that, at the very most, he’d recorded it as a possible album track. It did go Top 3 in England and to No. 1 in America. After many more successes, six years later Gerry came up with his masterpiece, “Baker Street” on United Artists, with that haunting saxophone intro, the tale of his busking down the London underground when first arriving from Glasgow.

I had thought that the lyrics of the song Mary Skeffington, (left) that had first turned me on to Gerry Rafferty, referred to a boy-girl romance that had soured later in life and that the title was a figment of the artist’s imagination. It wasn’t until Gerry died almost forty years later in 2011 that I learned from an obituary in the Guardian that Mary Skeffington was the maiden name of his mother. The piece also contained a description of episodes in his childhood that put an entirely different hue on the meaning of his lyrics.

The Guardian carried the information that ´his mother, Mary Skeffington, whose name would provide a Rafferty song title, dragged young Gerry round the streets on Saturday nights so that they would not be at home when his father came back drunk. They would wait outside, in all weathers, until he had fallen asleep, to avoid a beating. “If it wasn’t for you, I’d leave,” Mary told Gerry. The father, Joseph, died in 1964 when Gerry was 16.

Having not heard the song since 1972 I immediately found the song on Google and carefully listened to the words. When thinking of the memories that lay behind the lyrics I realised what had haunted him for the rest of his life, leading him to seek solace in his music. And, when that didn’t work, he found another way of blotting out those memories.

And make believe that you,   Are just a girl again.

When you had something there to light the way.

Mary Skeffington,  When you wake

You mustn’t  be afraid to face another day.

Think of what you have,  You’ll get by,

You’ve always been a lady,  Hold your head up high.

Look back on your home where you   Spent the best years of your life, Remember the man who asked you   If you would be his wife

Like Larry, I would like to think that Rafferty found some healing in writing that song, although I only very vaguely remembered it when Larry first began speaking of it. The story, though, and the very everyday manner in which Larry told it, reminded me of what heady days they were in pop history, and I was prompted to ask him what the young, and middle-aged Larry would have thought of the older man who quit the music industry, and re-settled here decades ago and who, by various smiles of serendipity, a a magazine. The English language edition of the glossy quarterly publication Lancelot, that must have been the deciding factor for hundreds of UK couples, besides Dee and I, to repatriate here to Lnazarote.

Just as Larry was beginning to seriously ponder my question, his wife Liz answered on his behalf by saying, ´he is still doing the same thing really. He is promoting and sharing. The product has changed:, what was music is now an island and a culture and a way of life, but through the magazine Larry is promoting and sharing his love for this island, just as he was once doing for music.´

Liz is quietly supportive and mindful of Larry. and anyway her own modesty would also prevent her from saying so, but she too has celebrated this lifestyle. In doing so she has made friends with indigenous people and visitors to this island as she has enthusiastically helped turn Lancelot into the well-known and deeply-respected magazine it has become.

I´m guessing, but I suspect she also helped Larry to become much-loved, highly-respected ambassadorial figure about whom we have written on these pages many times. There is a natural charm about them as a couple but Larry and I are perhaps both well aware that we, left to our own devices, would talk forever of rock and roll and all its minutia.

In both our cases, our wives make us part of this real world, ensuring we maintain our social skills. and converse through more normal channels than page and print.

But all this has reminded me that I must do an article for my blog pages about Gerry Rafferty, Stealers Wheel and the Rab Noakes connection. So, I´´´ d love to spend the afternoon just chatting but, boy,…time flies !

Broadcaster Steve Bewick sends greetings to all his Jazz friends and listeners at home and abroad. This week´s show features as many Jazz n’ Blues tunes that ´Steve and Gary Heywood-Everett could squeeze into 60 minutes. It highlights with Pete McSloy, a Xmas message from the Simpsons and concluding with a Xmas special from the Muppets. Social distancing rules virtually ignored. This show was recorded at Santa’s Grotto at the North Pole.

.If this sounds interesting please share it with your friends and join Steve on Wednesday, or Thursday at 9pm, or late Xmas Day at 11pm using the link www.fc-radio.co.uk

For archives of previous shows simply go to www.mixcloud.com/stevebewick/

In case of tv re-runs of Escape To Victory or the Strictly highlights package, or the re-showing of football matches on flooded fields of the seventies, shown to fill the gaps caused by covid attacking current fixture lists, please be aware that we will be posting on both the Saturday and Sunday Christmas Day and Boxing Day to ensure you have a plentiful supply of interesting reading on hand. Actually, though, it would be more truthful to say we have something of a backlog of work to publish,

BRIGHT FROM THE GET-GO