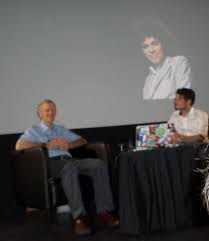 The first holiday we spent here on Lanzarote, around twenty years ago was just after I had started work on a collaborative novel with my Just Poets writing partner, Pam McKee. We each wrote separately, with neither of us knowing what was the subject matter or plot line of the other´s work. I, unknown to Pam, was trying to write a biography of my song-writing hero and friend, the late Townes Van Zandt, whilst Pam, I later learned, was writing a romantic novel under the title of The TurnPike Path. We almost randomly merged pages together every few weeks or so and as if by magic ended up with a book called The Healing Process, that to coin a Kristofferson phrase, was partly fact and partly fiction about a song-writing Pilgrim character based on Townes. I romanticised the holy trinity (above left) that was Townes and Guy Clark and Guy´s wife Susanna

When I borrowed for my book the names of Larry Yaskiel, editor, with his wife Liz, and some of their writers at the quarterly magazine Lancelot English Edition, I never thought that I would ever meet them. However, since coming to live her six years ago, I have become the owner of Larry´s books, attended a couple of his book launches and have even interviewed him a couple of times for these pages.

Those features remain available  in our easy to negotiate archives here at Sidetracks And Detours, and can be found simply by typing the name of Larry Yaskiel

photo 2 ´Larry Yaskiel (right) recently enjoyed his 85th birthday- Congratulations Larry! And congratulations Lanzarote! Larry is the author who has published the most pages about Lanzarote in English, reaching readers in the United Kingdom, Ireland, the United States, New Zealand and Australia.

When the magazine was born in 1985 it became the first island publication in the Anglo-Saxon language and one of the first with such characteristics in Spain. In the late seventies, Larry and Liz (left) were two English tourists in Lanzarote. The couple had been together for a few years and discovered that the island was their place. He had been a successful executive in the music industry, on the biggest record labels, alongside large groups and artists, such as Supertramp, Bee Gees and Jimi Hendrix, living in a frenzy between Britain and the United States. Larry’s memoirs in music are reflected in the book La Rocola del Bar Rumba. Larry Yaskiel, a lifetime in Rock, with a prologue by Miguel Ríos, a publication edited by the Cabildo de Lanzarote in 2019.

Shortly after settling in Lanzarote, they received the invitation, from the Lancelot Editorial Group, to direct a magazine focused on the English market. Larry, with a wide network of contacts in the English music press, received the best advice and the couple began the adventure. The interest in spreading the local culture of the promoters of the new magazine brought them closer to artists and historians from Lanzarote, such as César Manrique (right), Francisco Hernández Delgado, Maruchi Rodríguez and Agustín Pallarés, who influenced the style of the publication. That, together with the commitment made by the leaders of the Cabildo and municipalities more sensitive to culture, allowed the consolidation of the project.

The personality of Larry, an intellectual with an insatiable thirst for knowledge, prevented him from limiting the content of the magazine to a mere tourist guide. He read all the bibliography available in English and expanded his search at the British Museum in London, making findings that he shared with the archives and historians who sponsored him, as well as with his readers, disseminating chapters of the history of the relationship between Lanzarote and the Anglo-Saxon world that the majority of the population did not know. All this knowledge is reflected in the book (left) The British Connection with Lanzarote and the Canary Islands.600 years of history, published in 2018 by Ediciones Remotas, a work that was presented at the Instituto Cervantes in London.

Larry Yaskiel’s desire to find all the possible links of Lanzarote in the world led him to follow a track to, for the first time, in the nineties of the twentieth century, achieve personal contact between the descendants of the emigrant rabbits who in the eighteenth century emigrated to the United States, founding some the city of San Antonio de Texas and settling others in the state of Louisiana,  very close to New Orleans. The relationships encouraged by Larry Yaskiel promoted a flow of meetings on both Atlantic shores, which distinguished Larry and Liz, in practice, as true ambassadors. In recognition of the work, the Library of Congress requested a copy of Lancelot in English during the institution’s bicentennial celebration. This diplomatic function, not officially recognized, would not have been possible without the polite character, “British” in the most “polite” sense of the term, noble and affective of the couple, who have won sympathy among all the sectors in which they have been most related: the guild of the press, technicians of institutions, associates of different groups of Lanzarote society,  companies and educational centers. Since the eighties, Larry Yaskiel has been a regular giving talks in English for students of high schools, Official School of Languages and schools. In 2012 the Faculty Centre of Lanzarote paid tribute to him, presenting an index of 150 articles published by the author on different topics related to Lanzarote.

But the presence of this English gentleman extends where he can provide a service and make use of his contacts, such as at the receptions of representatives of British embassies and consulates or when he facilitated Brian Eno (left) to be present at the Visual Music Festival. Larry’s voice guides the visit of English tourism in the audio of the bus that runs through the Timanfaya National Park. He was also one of the hosts for the expeditions of the internship in adventure tourism of the University of Chichester in Lanzarote, an activity that has been carried out in the month of January for the last twenty years with Professor Duncan Reavey

And it is that this couple has been a model of integration, civility and friendship, who have integrated into the island and who have integrated their friends into their environment, regardless of nationality, as a family. As an example, his closest collaborator has for decades been the freelance designer for decades, Betty Romero (right), a freelance professional in the advertising and graphic design sector here on Lanzarote..

We included Words From The Writer, an exclusive interview with Larry on these pages in January 2020 and have also included reviews of both his books, all of which remain available in our extensive but easy-to-negotiate archives. However, reading this article for my research made me all the more proud to know Larry as a friend. For all his wide interests, kind deeds and wise words he is a man who wants to share, to give and take, to read and write, to teach and to learn. He is good company and you can´t ask for more from any friend. He has travelled the sidetracks & detours as pop music grew into rock and became an important voice in all our lives. He travelled on from Leo Sayer to Sandie Shaw to become an advocate of Lanzarote and its life style and has been as important as anyone in the way the island has developed, both ethically and economically.

For all these reasons, today, November 28, 2021, is a day of happiness for Larry for turning 85 years old and for Lanzarote, for continuing to enjoy his vitality and his good work.´