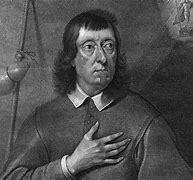 The Lives And Times Of John Milton

With the opening line to his sonnet, London 1802, Wordsworth addresses the poet John Milton (1608-74) (above), or more specifically, apostrophises him (as he is addressing someone who is dead and/or absent), and suggests that England, needs Milton now. Wordsworth believed the country had become stagnant in all quarters: the church (‘altar’) has become corrupt, the army and England’s military standing (‘sword’), its writers (‘pen’), and even the home (‘Fireside’). All is corrupted. The ‘heroic wealth’ that once made England’s homes and countryside great had been given up, and with it the country had lost its ‘inward happiness’. Everyone – and Wordsworth includes himself here – has become selfish.

Regardless of Wordsworth hoping for the resurrection of Milton, Constance Craig Smith , writing in The Daily Mail, began his review of this ´biography´ by reminding us how Milton´s works divided public opinion. The American writer and humourist Mark Twain, (left) in a 1900 speech about The Disappearance Of Literature, told his audience: ‘I don’t believe any of you have ever read Paradise Lost, and you don’t want to.’

If your school English lessons involved struggling through Paradise Lost — or any of John Milton’s epic works, like Samson Agonistes or Paradise Regained — you’ll know just what Twain meant. Milton’s language may be powerful and beautiful, but along the way you have to grapple with his dense metaphors, labyrinthine sentences and strange word order. You might have had to, as our regular readers still do, follow Sidetracks And Detours that become cul de sacs.

The poet T.S. Eliot (right) disliked Milton so much he claimed that he ‘violates the English language’. However, for many admirers, Milton is second only to Shakespeare as Britain’s greatest ever poet. Wordsworth revered him: ‘Thou hadst a voice whose sound was like the sea/Pure, as the naked heavens, majestic, free.’ Yet, as this biography, Making Darkness Light, concedes, Milton has ‘probably provoked more dislike and antipathy than any other English poet’.

Born in 1608, Milton grew up in an affluent London household and even as a schoolboy was a brilliant linguist, fluent in Latin, Greek, Hebrew and Italian. After Cambridge University he decided that his destiny was to be a poet and spent years immersing himself in theology, philosophy, science, history and literature.

He wrote the pastoral poem Lycidas in his late twenties, which was well received. After two years travelling in France and Italy, he began work as a schoolmaster, tutoring children from well-to-do families. In 1642 he married 15-year-old Mary Powell, but the marriage lasted only a few weeks before she fled back to her family.

Author Joe Moshenska suggests the problem wasn’t just the couple’s 18-year age gap. Milton often thrashed his students if they were cheeky or not concentrating, and Mary hated this. Other biographers have suggested she left because the virginal Milton, traumatised by the reality of a flesh and blood woman, found he was impotent.

Whatever the truth, their brief union was much gossiped about and cemented Milton’s reputation as a ‘joyless prudish misogynist’, as Moshenska puts it. This episode is said to have inspired George Eliot’s portrayal of the marriage of the cold, cerebral Mr Casaubon and the lively Dorothea Brooke in Middlemarch.

By now, the country was heading towards civil war as Charles I tried to impose his will on a rebellious Parliament, and Milton, who was staunchly anti-monarchist, was gaining a reputation as a radical, outspoken writer. In 1645 Mary and her family were forced to leave war-torn Oxfordshire for London. Somehow, the couple reconciled and had two daughters.

In January 1649 King Charles, wearing an extra shirt so he wouldn’t be seen shivering in the cold, was led to the scaffold and executed. Milton, who had enthusiastically defended the right of the people to hold their rulers to account, became an important figure in Cromwell’s regime, and was appointed Secretary for Foreign Tongues, charged with translating government correspondence into Latin and other languages. In his spare time he wrote on a wide range of topics, including two powerful pamphlets on the need for a divorce law, and his Areopagitica, published in 1644, was a stirring defence of freedom of the Press. More than a century later, it would help shape the U.S. Constitution’s First Amendment on freedom of speech.

By his early 40s he had lost the sight in both eyes and could only continue his prodigious output with the help of assistants. ‘Even as his sight fell dark, he remained convinced that he was doing God’s work, helping the nation,’ Moshenska writes. Around this time he wrote the sonnet known as On His Blindness, which contains the famously poignant line: ‘They also serve who only stand and wait.’

Mary died shortly after the birth of their third daughter and in 1656 Milton married second wife Katherine, who died two years later. To add to his problems, with the restoration of the monarchy looming, Milton, as a leading Cromwell supporter, had to go into hiding.

For a few weeks he was imprisoned in the Tower of London and must have feared for his life, but was released after paying a hefty fine. He spent the rest of his life living quietly, writing poetry.

His  most famous work, Paradise Lost, begun in the late 1650s, was eventually published in 1667. Written in blank verse and stretching to over 10,000 lines, the poem has two main narrative strands: one about Adam and Eve and their expulsion from Eden, the other about Satan and the fallen angels.

Controversially, Milton made Satan a charismatic and compelling figure. William Blake claimed Milton was ‘of the Devil’s party without knowing it’.

Paradise Lost has divided opinion ever since. Samuel Johnson thought it among the ‘highest productions of the human mind’, while Edgar Allan Poe sniped that it could only be enjoyed as ‘a series of minor poems’.3

More recently Philip Pullman chose a quote from it, ‘his dark materials’, as the title of his children’s trilogy — written in part, he said, to evoke the atmosphere of Paradise Lost, which he has loved since childhood.

It is not the job of a biography to make you like its subject, of course, and in Making Darkness Light, Milton comes across as a remote, forbidding figure. The women in his life remain shadowy, but what is known is that by the end of his life Milton had fallen out with all three of his daughters.

Moshenska, (right) a professor of English literature at Oxford, declares that rather than being solely about Milton’s life, this is a book ‘about what it means to live with, and to teach, and to be taught by a writer’s work’, and this is a biography where the author keeps elbowing himself into the foreground.

This means the reader gets Moshenska’s reaction to Milton’s writing, accounts of his travels to places Milton visited, and even imagined conversations. ‘What evidence is there that this dinner, or one like it, ever took place? None at all’, he says blithely at one point. ‘I must own up to some self-indulgence.’

Some readers may find this delightfully original; I found myself wishing he’d spent more time on filling in the historical context. Milton lived in a time of turbulence, but it doesn’t come alive.

Moshenska does come into his own when he’s talking about Milton’s writing. He admits to disliking the way Milton ‘seems to want to bludgeon me or whoever reads his works into submission with his erudition and his eloquence’, yet he argues that his poetry is too dazzling to deserve the obscurity into which it has fallen.

Generations of schoolchildren may disagree, but reading Milton, he declares, ‘is valuable and fascinating. . . something worth doing, something worth expending time and energy upon’.

it has taken me a long time to arrive here, but these days, I think I agree with Mr. Moshenka´ s assertion about Milton´s work, though I remain as confused as ever about whether any text reveals or conceals the true character of their creator.