Blog
You are here: Home1 / Blog2 / Literary3 / THE RIDDLE OF MUSIC WITH A HEARTBEAT 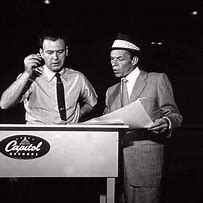 THE RIDDLE OF MUSIC WITH A HEARTBEAT

Nelson Riddle was possibly the greatest; one of the most successful arrangers in the history of American popular music. He worked with global icons such as Peggy Lee, Judy Garland and many more. And in a time of segregation and deep racial tensions in the US, he collaborated with leading black artists such as Nat King Cole and Ella Fitzgerald, forming close, personal friendships with both. He also wrote successful TV themes and Oscar-winning film scores.

A complex and often forlorn genius, he will forever be remembered for his immortal work with Frank Sinatra, but like fine wines his later vintage was just as palatable, if somewhat of a surprise.

At his peak, Frank Sinatra never seemed to make a bum call. He sang ahead of the beat, on the beat, behind the beat, rendering punctuation and syntax seemingly easy as breath. As for the man who buoyed him to that peak and sat with him awhile—well, Nelson Riddle’s relatively invisible job seems the purview of music heads and fellow arrangers.

A book showing who he was, how he was, how he plucked from mid-air these successions of rosebeds from which the Chairman preened and proclaimed, would make for one shining accomplishment.

Andrew Hamlin, (right) was born and raised in Seattle, Washington, USA, where he resides today. He attended the Evergreen State College in Olympia where he wrote and edited arts coverage for the Cooper Point Journal. He began writing professionally about music and the arts in 1992. He is the film critic for the Northwest Asian Weekly, and his work has appeared in the Village Voice, Rolling Stone Online, Seattle Times, San Diego Reader, Goldmine, Seattle Weekly, The SunBreak, and other publications.

He posted an article that first appeared in Jazz Times, announcing a new biography, published in May 2021 that would seem to have all the material needed to build one such ´shining accomplishment. It is, after all, an authorised biography, (though on reflection that is not always a good thing) and has been written in collaboration between biographer Geoffrey Littlefield and Christopher Riddle, son of the biography´s subject (though on reflection such a collaboration is  hardly ever a good thing).

´It’s my sad duty to report´, he noted ´that this book is not that book. Peter Levinson’s biography September in the Rain, from 2001, might be that book; it’s certainly better integrated between the man, the music, and the quiet madness. Arranged by Nelson Riddle, from Riddle himself, the 2001 biography unlocks his trade secrets, essential for anyone learning orchestral or big-band arrangement.

A clue about this book might be detected  in a news announcement that ´Coming soon to TV Confidential: Screenwriter, producer, author, and music historian Geoffrey Littlefield on Nelson Riddle’s many collaborations with Frank Sinatra, Nat King Cole, and Ella Fitzgerald; why Riddle always believed that “less is more” when it came to writing arrangements; Riddle’s many contributions to movies and television throughout the ’60s and ’70s, including the iconic theme to Route 66; and how working with Linda Ronstadt (left) resurrected Riddle personally and professionally.

You might be alerted, seduced or deterred by the hints of sensationalism in that announcement, and your worst fears might be exacerbated as you read the rest of Mr. Hamilin´s comments-

´Geoffrey Littlefield, an Englishman with an admirable jones for the Great American Songbook, means well. But pages fly by full of awkward constructions, redundancies, extensive quotes from web sources, limp testimonials from Riddle’s clients (Johnny Mathis takes several smooth sentences to say nothing at all), and oatmeal prose. He clearly has preferences, and even passions, about Riddle. But they lose their way to the page. Littlefield takes seven chapters of augmented listicles, dryly detailing Riddle’s credits, before diving into the man himself. And he finds, at this long last, a compelling subject: Riddle was a workaholic who fathered seven children, likened music to sex, and built each chart around a romantic fantasy. Riddle was a family man who carried on for years with Rosemary Clooney and thought seriously about blending her kids with his, to make a hypothetical family of 12. (He settled for his secretary instead.) Riddle was a boozer who, like Sinatra, hit the bar and the cigarettes heavy between sessions but, Riddle, unlike his shining client, never wrung any glamour or credit for the zeitgeist. Riddle was eventually a midlife re-marrier whose second wife wrested everything tangible, at least everything that mattered, away from the children.

We sit at a remove from such affairs, naturally, no matter how rendered. What we’ve got is (for one example) I’ve Got You Under My Skin, hearing it breathe as an entity, bidding hello, building, building, until the break, until the singer sails from the break, soars, and winks goodbye´.

This article was collated by Norman Warwick, a weekly columnist with Lanzarote Information who is also owner and editor of this daily blog at Sidetracks And Detours. He is also a founder member of the Joined Up Jazz Journalists (JUJJ) with Steve Bewick, writer, poet and radio presenter of Hot Biscuits weekly jazz programme, Gary Heywood-Everett, jazz writer and local historian and Susana Fondon, contributor and reporter at Lanzarote Information. The purpose of forming JUJJ is to share a love of jazz music at the same time as growing our knowledge of the genre.

So, to hear a wide range of jazz music, interviews and opinions, just settle down with a cup of coffee and enjoy Hot Biscuits presented by Steve and Gary at www.fc-radio.co.uk

Remember that you can also find articles from Norman and Susana by subscribing to the newsletter produced by Lanzarote Information. Of course, you will a daily post as well as plenty of good reading from all four journalists in the music section of the massive but easy to navigate archives of Sidetracks & Detours at