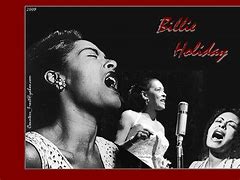 I’m not a woman. I’m not black. I’m not a jazz musician although in my dreams I’m playing keyboard in the Miles Davis band or alto on tour with Ellington. I can’t sing and I don’t understand about sexual masochism. So how on earth can I write about Billie Holiday ? How can anyone ? A lack of these particular attributes hasn’t stopped a lot of people trying though; the TV film by James Erskine, ‘Billie : In Search of Billie Holiday’, just screened by BBC, being the latest. You could say that the film is just another point of view. Mine is from my white, Northern English armchair so all I can do is write about Billie and this film from there.

The film was certainly interesting but for all of its novel approach, which focused on Linda Lipnack Kuehl’s unfinished and unpublished biographical research about Billie Holiday.

Linda Lipnack Kuehl (January 24, 1940 – February 6, 1978) was an American arts journalist, based in New York City. Intending to write a biography of Billie Holiday, she interviewed friends, fellow performers, and key figures in Holiday’s life, but died before its completion. Various other writers’ biographies on Holiday have drawn upon Kuehl’s material, as did the film Billie (2019), which is narrated by Kuehl’s recorded interviews. She worked as a high school teacher and free lance writer..

Much of the material about Billie´s life is already known. Her childhood has been well documented through articles from Robert O’Meally, Yoko Suzuki and Georgio Campanaro, the police victimisation by Harry J Anslinger and Colonel George White covered in Johann Hari’s article ‘The Hunting of Billie Holiday’, her drug and sex dependency written about endlessly. What was new were the journalistic recordings by Linda Kuehl whose life was unknown as was her fascination with Billie to the point of spending years gathering information for a biography which never happened. Linda died before it reached a publisher.

No. Many of the sections of the film about Billie’s life and death were known but here they were presented with validity by being the respondents’ voices from Kuehl’s research.

Tony Bennett (right) for example met with Billie on a number of occasions and recalled her ordering him as a young man to get her some gin. He said that she told her own story through her voice, that she had a wild life and that the nearer you got ‘to the top’ as she did the more chance there was of cracking up. Then there were testimonies from Billie’s close friends who spoke of her affectionately as someone in desperate search for the closeness of others and who wished only to own a house in which she could bring up, if not her own children then those she could adopt.  Harrowingly, there were the testimonies of those who had known the family in Baltimore where Billie, then Eleanora Fagan, turned tricks in the local brothel when barely in her teenage years.

Of course jazzmen featured (and they were all men) like Harry ‘Sweets’ Edison the trumpet player (left) who spoke of her being tough ’like a feminine man’ on the roughest of tours, sleeping on the bus when white musicians got to stay in a hotel, and Jimmy Rowles the pianist who recalled her sexual appetite for both genders. Punctuating all of these voices was that of Linda Kuehl, her voice prominent on the many cassette recordings which, alongside home movie insights into her life story, revealed not just an obsession with Billie Holiday but another tormented woman who met a mysterious and suspicious end. Kuehl, from her white middle class perspective (she was a journalist) pulling together data about the experiences of a black jazz diva in itself throws up many unanswered questions of Linda’s perspective and standpoint not to mention her own mysterious death.

And then there was the haunting and haunted voice in interview of Billy Holiday herself, trying to articulate her own story, blurred as it might be at the edges of her life.

Interspersed with familiar but now colourised film clips of Billie, the film told her life story through the tapes from prostitution in Baltimore to jazz breakthrough in New York with Benny Goodman and Artie Shaw. Familiar now are the tales of rape of a black fourteen year old girl, drug dependency and incarceration as a young woman, fame and victimisation into maturity and death at the hands of drug-dealers and hounding Federal Narcotics agents.

The music was a little secondary to the life in this film but there were fine features of her singing Don’t Explain, Fine And Mellow, with Lester Young (right),  and of course Strange Fruit. I have to say that I find Billie’s voice hard to listen to and that might be the point. Anguished and hard, it reflects her life in a way which makes you want to look away. But she makes you listen, makes you look hard at the lynchings in her famous song, makes you acknowledge her presence and that of a black people excluded, abused and vilified in society. Her music, the drag behind the beat, as if weary, and that catch of pain and pleasure in her voice abide through it all, insisting that you acknowledge them.

Mores the pity then that Kuehl’s work didn’t reach publication and didn’t see the light of day until now, that Linda herself should die in the bizarre and unexplained circumstances of falling from a hotel window before going to a Basie concert. But the voices of those who sort of knew Billie Holiday (could anyone have really known her ?) confirm for her a special place in black cultural history in the United States and through Linda Kuehl’s research recognition as a jazz singer, a protest singer and the voice of struggle alongside that of such figures as Martin Luther King. In the turbulent wake of the Black Lives Matter movement it may come as no surprise that there is so much interest in Billie Holiday, a new feature film ‘The United States versus Billie Holiday’ recently shown on Sky Cinema. One can only hope that such renewed attention will bring her art to many more people than before and that her message of pain and pleasure, which is repeated in this film for TV, leads to social change which alleviates for others the struggle she endured.

photo 5 Gary This article was written by Gary Heywood-Everett one of the four ´joined up jazz journalists (JUJJ) here at sidetracks & detours writing to share jazz news and their love of the genre.

Gary is a frequent contributor to Sidetracks & Detours and is a researcher and co-presenter, with Steve Bewick. our Jazz correspondent, of Hot Biscuits which you can catch on

Jujj was formed with the intention of growing jazz knowledge through sharing and making Jujj members better able to serve and engage a jazz industry already well served by informed listings compilers, excellent magazines and radio broadcasts around the world.

It is the intention of the JUJJ writers to deliver news, previews, interviews and reviews from the jazz world and Sidetracks And Detours is always happy to receive work submitted by readers. If you have a piece of your own writing you would like us to consider please submit it as Word document attachment to an e mail addressed

Being a not-for-profit organisation we unfortunately cannot offer payment, but any work subsequently published will be fully attributed. You are therefore to include brief autobio details which we will include with your article if you wish. You might also wish to include for inclusion, an appropriate jpeg image of yourself. If you wish to include any photographs that might complement you should send those as an another attachment to same e mail in a zipped folder

We look forward to hearing from you and we thank you for your support.

We are also extremely grateful to Jazz In Reading, Ribble Valley Jazz And Blues and Music That´s Going For Places for sharing information with us and allowing us to pass it on to our readers.