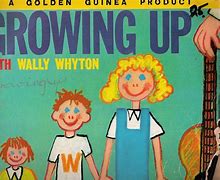 ´To many people Wally Whyton was the voice of country music on British radio; to others he was the creator of the television favourites Pussycat Willum and Ollie Beak (see left) ; and to record-buyers his talents spanned a wide musical spectrum: he was a leader of the short-lived 1950s skiffle movement before he moved into folk, and then he became one of the biggest sellers of children’s records.´

Sadly Wally died in 2011, but Tony Byworth, another music writer I always much respected, used that above paragraph to begin his very appropriate obituary for Mr. Whyton. Published in the Independent newspaper, the article also offered more detailed biographical details going on to say of the presenter,

´Born a short distance from Euston station in London in 1929, on the site where Capital Radio now stands, he trained as a commercial artist but it was the recordings of such as Bessie Smith, Charlie Barnet and Louis Armstrong, and associating with Lionel Bart (right), Mike Pratt and Tommy Steele (all then struggling to break into the entertainment business) that bred his ambitions for a musical career. At that time several of the British jazz bands had their own skiffle groups (comparable to American jug bands, with a repertoire founded upon folk and country), which convinced Whyton that he could present such music equally well.

So the Vipers were born, originally comprising Whyton as lead singer, Johnny Martyn and Jean Van den Bosch (and later expanded with Tony Tolhurst and John Pilgrim), and a residency commenced at the famed 2Is Coffee Bar in New Compton Street, in July 1956. A couple of months later the group had secured a record deal with Parlophone/EMI, with George Martin producing, and scored a Top Ten hit with their second single Don’t You Rock Me Daddy- O. The group enjoyed two more chart successes – “Cumberland Gap” and “Streamline Train” – within the following four months. Although the skiffle boom quickly faded, the Vipers remained together until the end of the decade, releasing singles of varying styles, including one adopting the name Sharkey Todd and the Monsters. Hank Marvin, Jet Harris and Tony Meehan were also passing members before joining forces with Cliff Richard. All the Vipers’ material was recently released in a three-CD box set, 10,000 Years Ago, by Bear Family Records.

With the commercial pressures of heading a group behind him by the early Sixties, Whyton looked to pursue folk music interests but television intervened as a one-off guest spot led on to filling in for Rolf Harris on two other shows and, in turn, hosting his own children’s series, The Five O’Clock Show, for Rediffusion. That led to the creation of the puppet Pussycat Willum.

´The puppet’s success was amazing – he was the biggest artist on the network´, once told Tony Byworth. ´I was doing four shows a week for Rediffusion and Pussycat Willum used to get about 400 letters every week, more than anyone else involved with Rediffusion.´ The puppet’s success led on to other creations – Ollie Beak, Joe Crow, Spike McPike – and Whyton started recording a series of children’s songs albums, all of which achieved substantial sales.

Whyton was also active on the folk scene, working the clubs and recording for Argo and Philips, and wrote one of the first ever conservation songs, Leave Them a Flower. By the mid-Sixties he had become a regular on radio, first with Radio 2 sessions and then presenting Folk Room, Strings ‘n’ Things and Junior Choice, among other shows. In 1967 he was approached by the producer Ian Grant to host Country Meets Folk, a new series which bravely brought together the realms of country and folk music. Originally intended as a six-week series, it remained on air for six and a half years. As a reason for the show’s success, he explained that, ´although both musical forms had their own identity, neither had the individual airplay that the ever increasing fans would have liked´.

Another series, Both Sides Now, with no definitive musical ties, followed on the heels of Country Meets Folk and when the BBC launched its weekly Country Club show in the mid-1970s Wally Whyton was the natural choice as its presenter although the idea of being a “specialist” presenter worried him initially. ´I had my own favourites like Hank Williams and Doc Watson, but I wasn’t into everybody and felt I would do it until someone better equipped than myself came along. But then you start hearing the songs, meeting the artists, talking to the writers and covering the events, and the pieces of the jigsaw fall into place´.

It was his interviews with countless country artists, and coverage of such events as the annual Wembley Festivals and regular visits to Nashville, combined with his informal presentation, that earned him respect within the industry as well as immense loyalty from the country fans. Although he never overlooked the stalwarts of the country music scene, he also introduced many new artists to the British public by giving their records their first plays, among them Garth Brooks.

During his career Whyton made over 2,000 television appearances and probably twice as many radio broadcasts, yet he always remained accessible to his audiences, meeting them at concerts and personally answering letters. It was a way of life developed from his skiffle days when audience association was just as important as performance. He was always willing to help another, although he admitted he was not always the best talent spotter. One of his favourite stories was about how he advised Kris Kristofferson (left), a Rhodes Scholar at Oxford, that he should change his name for the recording industry. Kristofferson subsequently recorded in London under the name of Kris Carson. A couple of decades later the two met again at Wembley, with the first words uttered by the famous singer/songwriter: “Hey, Wal, I changed my name back again.” Such stories not only displayed Whyton’s honesty but also revealed his great sense of humour, even at his own expense.´

Wally Whyton left his BBC Radio 2 show in late 1995, but continued his long-running BBC World Service presentations until December 2010. The long and successful career described by Tony Byworth in the above piece will be remembered by thousands, some recalling his part in the great skiffle movement, others who were bought his children´s albums by parents and grandparents, and those who listened in maturity to his radio broadcasts´.

I will always remember him as the voice on the radio who one night suddenly named me and spoke to me personally, and pulled apart my review of a Guy Clark album. He spoke gently and kindly to millions of other listeners too as, in the course of no more than a dozen sentences that showed me that he was a wise and experienced musician and I was simply a not very great pretender. What he said that night forced me to take a good look at myself and to listen more closely to the voice in which I wanted to write.

He was no wally, Wally and I am still trying to put into practice the advice he imparted in that radio show. He deserves to be well-remembered and Mr. Byworth´s article will serve in posterity.

WE´RE BACK ON SCREEN