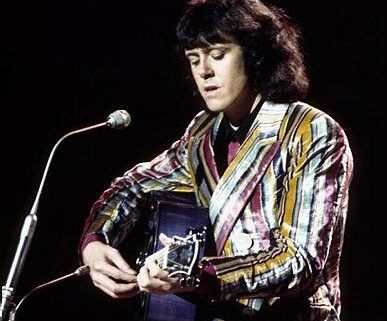 I first heard Donovan via his album Fairytale, borrowed from a school friend whom I have not seen since those days – though he became a professor of Buddhism in Bangkok, via the Sorbonne, and I became a bohemian dropout in Toronto and later a literary refugee in the Manchester hinterland. We both were poets – and lovers of folk and blues.

And what an album that Fairytale was, featuring songs about a runaway tin soldier, violent hash smokers, Charlie Mingus and music on Sunny Goodge Street – mellow, fantastic –  a Candy Man,  a Summer Day Reflection Song, and a Jersey Thursday.  Later I borrowed what was called in Canada Catch the Wind , (the LP subtitled What’s Bin Hid and What’s Bin Hid), Donovan’s very first LP with its hit title about impossible love, followed by mysterious ‘Truckin’ Mama’s, Santa Anna’s soldiers, more blues singer-lovers needing ‘somebody on your bond’, the eternal wage slave bemoaning his Goldwatch Blues, and a puppet, this time a Tangerine one – a song without words but with an almost at times tingling and tinkling guitar.

All with good jazz, hints of folk, and something else- the happy, magical mystery of burgeoning life driven by the melodious guitar melodies of a street balladeer. But there was an awareness of loss and drift too in for me the haunting ‘Cuttin’ Out song, about going down to Joe’s poolroom and finding ‘she’ wasn’t there. That was the essence of Donovan’s craft for me, a craft of wistful goodbyes as well as joyful hellos.

I was seventeen and I lived those streets, those sounds, that fairytale, loving then (as did Donovan) the Tennysonian world of King Arthur and the blood-tragedic comedy and romance of the old border ballads. And of course the world posed by the glowering Bob Dylan, then also a young Talkin’ New York Blues troubadour, and the Welsh Dylan Thomas. Welsh Dylan went the way of all bottles in 1953 and his namesake Bob was to evolve into a troubadour of the damned. But Donovan retained his Fairytale image and was the champion of a world of wonder and charm, as much as wistfulness and sadness. For Donovan the road to enchantment trod and rode many paths, through folk, jazz, rock, calypso, blues and anything else that struck his fancy.

A Fancy it was indeed that made one of my Christmases melodic with a gift of his Sunshine Superman album with the wonderful tribute to Linda Lawrence- a six minute Legend of the Girl Child Linda, The Season of the Witch with its reference to Jefferson Airplane, and the very Tennysonian Guinevere with its evocation of the lonely, yet poetic Camelot.

The hit singles were coming fast then – with Sunshine Superman itself and the effervescent, tongue in cheek Mellow Yellow, all with over and undertones of feminine eroticism and spiritual joy. And all smoothly evolving into electric guitar runs, and background chamber orchestras of varying intimacy. As the age of Aquarius and Flower Power subsumed pop music and stage Donovan evolved from a Hoagy Carmichael, Woody Guthrie/Tom Paxton street busker into a versatile stage performer in acoustic and electric guitar, and a variety of other instruments which decorated his own sound and his own melodic voice.

Who else but a twentieth century medieval troubadour could have made a hit out of an enigmatic hurdy gurdy man, ( a product of his transcendental Maharishi Mahesh Yogi days) ,a modern love letter  written around the Vietnam War, and the call of Atlantis. The snap magical child-like lark of Barabagagal (with the Jeff Beck Group) was yet another twist in the time travelling Pied Piper who skippered The Good Ship Donovan.

Yet also the blues of varying degrees haunted real life as well as the music. As a dropout ‘hippy’ in Toronto’s Yorkville I heard a lot of Young Girl Blues and the like in Yorkville cafes, the fondly remembered parties at poet Ian Young’s, and at countless other venues, where hosts  and hostesses had a record player and the where-with-all to buy records. I still have an unpublished story I wrote, based on Donovan’s Young Girl Blues, while still living in Toronto.

In Donovan’s life his Sunshine Superman came in the form of Linda Lawrence, the ex girlfriend of my favourite Rolling Stone, Brian Jones, with whom she had a child named Julian.  Linda’s story of life with the increasingly sensitive, insecure and drugged up Brian, and her own exile in America is a large part of the often intertwined destinies of that era’s singer-songwriters.  Linda refused to Marry Donovan on the rebound from Brian, who was doomed to die in a mysterious drowning at Winnie the Pooh’s Cotchford Farm in 1969. The story of Donovan’s own eventual breakdown and easing himself off touring and the limelight, and his re-union with Linda via a chance meeting at his own cottage in the woods is a fairytale in itself, as is Donovan’s step-fathering of the fatherless Julian. This was in 1970, a time for rest and reflection and a downsizing of the poet-singer’s commercial and high profile life.

I had no fairytale at the time and lived in various lodgings, latterly in the home of a kindly Quebecoise dressmaker Sara Orion de Champagne and her son Michael. He fulfilled his dream and became an anthropologist. I remained a dropout with a romantic yearning. And a yearning to see Donovan did bear fruit when fellow poet Ian Young loaned me a reporter’s door ticket to see the troubadour himself in an intimate small concert he gave at a small hall adjacent to Yorkville. I was too shy to play the reporter but had a good seat near the front, where he played most of the concert sitting down with his legs dangling over the front of the stage. I wrote my poem The Dancing Flute as an image of that event.

It is an image I cherish even after all these years. And, many years later one which I missed in Manchester when I was unable to see him in concert at The Library Theatre. Life and work was then pressing on me in a more domesticated way. But were I to have that reporter’s card today and had gone to his Manchester concert, what would I have asked him?

Here in my own world I have re-amassed Donovan LPs and re-mastered CDs, giving me a large repertoire, even of songs post the sixties era that so epitomised the flower-child pied piper who’s speckled coat and career faded in the sober seventies into a background timbre. Perhaps for me the epitome of the gentle folk tale lullaby singer’s acoustic albums were his ‘A Gift From a Flower to a Garden’ with its overt childhood melodies, themes, and accompanying drawings

And the last of my sixties era LPS, The Open Road – a  John Carr, Mike Thomson and Donovan collaboration as a band- , with its happy mix of very grown up reflective songs, seemed to unite Donovan the writer of the songs with both his past and present. Electric guitar blues blend with harmonica wailings, acoustic echoes and country style finger picking. My favourites are the country style Song For John  and the  dark chanting melody of Celtic Rock with its threat of trolls ‘down in the wood in the murky gloom/ trolls go marching two by two/down through the cave in the mouth of doom/ down in the gloom gloom gloom.’  As for this album, who could resist the chorus of Riki Tivi Tavi, or pondering the future with Clara Clairvoyant, or measuring the implications of Poke at the Pope (Paul VI):  who’s ‘eyes are sunken and his cheeks are hollow’.

I spotted an Open Road vinyl LP in a record memorabilia shop in Rochdale a few years ago.  But my From a Flower to a Garden – For the Little Ones LP was bought in a second hand shop in Toronto on a visit to my old haunting grounds. And the one true relic of those times is the folder of original illustrations and lyrics for the two-LP  boxed set of A Gift From a Flower to a Garden…. surreptitiously retrieved from a party I attended in the late sixties, at which no one claimed ownership and no one refused my taking it home. All rather morally dubious I suppose but nonetheless a treasured relic of the magic of those days.

My favourite song is the Enchanted Gypsy, one of the elite band of wanderers that I longed at one time to be. And like Donovan, there is that gypsy scholar in all of us, whether he is a lover of Tennyson or not. There is at least one song in us if it is only the song of the open road. And as Donovan said in his tribute to Jenny Boyd as Jennifer Juniper, ‘Well you know just lately this happy song it came along’.  If to travel hopefully surpasses any arrival then the Good Ship Donovan still sails in the wind of melodic nostalgia, ultimately in the 2020 publication/release of Luna Love and a poetic gaze at Donovan and Linda’s 50 years of marriage in the afterglow of the spiritual, natural and cosmic awakening of 60s Britain and North America – the birth of world music and the artistic sun and moon. That is not quite my world today but it is Donovan’s and his is still truckin’ and he is still my ‘skip-a- long Sam’ and that flower which flung him into my garden.

And he is still that poet where Bob Dylan is not. Having set Shakespeare’s Under the Greenwood Tree to music for a theatre production he also made a poignant success of W.B.Yeats’s  Song of the Wandering Aengus, the youth who fishes out a woman of artistic dreams while fishing for trout and always follows the dream. When I first heard this I never dreamed it would one day feature at a funeral. But it was the final musical act in the long journey of a fellow poet whose coffin I helped to bear.

So goes the first line which strangely epitomised Joe Lozarzewski, ‘the Rochdale Ranter’, a late friend of mine who certainly was not a shouter at all but a gentle seeker of the calm beneath the rage.

Though I am old with wandering

Through hollow Lands and hilly lands,

I will find out where she is gone,

And kiss her lips and take her hands,

And walk upon the dappled grass,

And pluck and pluck till times are done,

The silver apples of the moon,

The golden apples of the sun.

Joe went where she did and that happy song went with him: Yeats’s great myth- with Donovan’s melody ‘that just came along’.

Poet to poet, to poet; song to song, that day still lingers along with that special music of a vibrating magical era that will always, like Donovan, be more young than old.

SEAMUS KELLY IS an admirer of Tracy Chapman