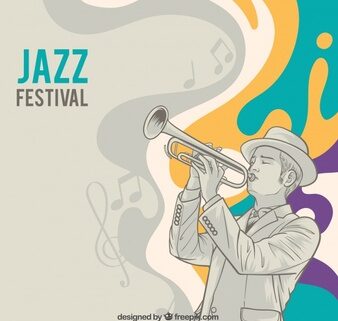 Most of our Sidetracks & Detours followers will know that I was dragged kicking and screaming in to Jazzland, from the comfort of my rocking chair, pipe and slippers and the headphones through which I used to listen to that nice Mr. Nat King Cole and the twinkling, tinkling tones of Oscar Peterson, (left) or the strings of Menuhin or Grapelli. I thought then, and still today, that such music is jazz but from Mr. Bewick I have learned that jazz has a wilder side and that I needed to drive for Miles, or catch a Coltrane, to cross the border into jazzland.

So, when the idea emerged of putting together a few articles on jazz over ten consecutive posts and calling it a festival I knew I would need a joined up journalist to guide me into new territory. My old mate Bewick (right) came to mind straight away; my former co-presenter on a weekly all across the arts radio programme, presenter and interviewer for his own Hot Biscuits programme on fc-radio-co.uk and even an occasional contributor to these pages, Steve had just returned from a jazz assignment in Tel Aviv. Nevertheless, he not only agreed to become a Joined Up Journalist for a while but also re-introduced to me his colleague Gary Heywood-Everett, a writer I used to know when I lived in the UK.

So, without the recruitment of these two jazz fans the project might never have been started let alone completed. If I could I would nail a blue commemorative plaque into the walls of Mr. Bewick´s home in Milnrow, just under the window sill of the upstairs bedroom converted into a recording studio where he builds his Hot Biscuits programmes. The blue circle cemented on would read, ¨This is the home of Steve ´Small Boy Tall¨ Bewick, the quiet man of jazz sound.´

Similarly I´d climb a ladder in the dead of night to place a plaque on the home of Gary Heywood-Everett. (left) . It would declare this to be the home of ´a writer, historian and lover of those who play, arrange and produce jazz´ as a neat reminder that when offering his first piece to the festival it was of Gil Evans, a man labelled the ´lone arranger.´

Of course the world didn´t stop spinning whilst I was collating, condensing, changing scores of words into hundreds and thousands with which to decorate the festival. I still also had to produce my weekly art column for Lanzarote information and when making sure that my editor hadn´t changed one word of what I´d written for a particular edition I was drawn into reading an interview by my colleague, although we have never met,  Susana Fondon who had interviewed a British musician, resident here on Lanzarote, who plays occasional jazz-tinged pieces in his gigs in the restaurants and bars frequented by residents and tourists alike, should covid condescend to allow that.

I realised Susana Fondon´s gently-probing interview would lend a welcome counterpoint to our mega-loud claims for jazz stars and serve as a reminder for readers that jazz offerings can be found in the most unlikely places, like the tiny El Patio bar in Teguise on Lanzarote and that jazz can be produced on the least likely instruments we might not feel are built for jazz hands. We would point those doubters in the direction of Alexis Lemes a maestro on the timple, or to Pablo and Humberto who create some wonderful improvisational jazz on violin and piano during several concerts we have seen on the island.

It was great that Susana came back to us, after checking with the artist she had interviewed, and said they would be ´chuffed´ to be involved. So, my third blue plaque would be sited at each of the many little bars at the nightspots of Lanzarote with words to the effect of ´a special place reserved for Susana Fondon, friend of the island´s musicians and a great enthusiast.´

Another plaque would be placed on the door of The Rooftop Bar in The Biosphere Centre in Puerto Del Carmen where she first heard Tony Cummins, to acknowledge the fact that he was the only Lanzarote based artist to be included in the inaugural Joined Up Jazz Festival, and in some ways was the glue that held it all together.

Etiquette determined that I should then contact my editor at Lanzarote information to seek his permission to ´borrow´ his contributor and the article already published on his site. ´Miguel´ (left) not only responded with absolute permission but also with some practical advice for running such a ´festival.´ I had sought his approval some eighteen months ago when I set up the Sidetracks & Detours daily blog in case he thought it might in any way compromise the articles I delivered for his magazine (mostly all across the arts, but with splashes of jazz occasionally) and he had been very encouraging about that too.

I would send Miguel some sort of blue plaque image from Pixabay or such like, that he could pin on his site, to celebrate his willingness to see that Sidetracks & Detours stands to complement, not compete, with Lanzarote Information and that there is room for us all on the island.

So with Steve, Gary, Susana and Tony on board and with Miguel´s approval, I started work on the festival and was greatly encouraged that Steve had reached out to some of his contact list for the Hot Biscuits show and suddenly we found our then-forthcoming festival.

The blue plaques we afford to Jazz In Reading and to Jazz North will read of their support for jazz in their region, but will look less like a blue plaque that an article on Sidetracks & Detours and we very much look forward to delivering an article about each of the organisations not only as a as way of saying thank you, but also of guiding their readers down further sidetracks and detours of Joined Up Jazz Jives.

All the listeners to Steve Bewick´s Hot Biscuits show who contacted the programme to say they had followed his links to our very strange ´jazz festival´ and who made positive comments would all deserve, if there were such a thing a Hot Biscuits hot fan badge, a bit like a Blue Peter badge. Imagine that,….well you´ll have to, actually, because we don´t have any and there are far too many of you. Consider whatever it is you imagine as your own blue plaque inscribed with thank you !

Of course, those who most deserve blue plaques, though many already have one or some kind of equivalent, are those artists who were featured in our Joined Up Jazz Festival. Those plaques would therefore go to our stars John Coltrane, Bessie Smith, Gil Evans, Billie Holiday, Ella Fitzgerald, and those who also played whilst passing through such as McKinney´s Cotton Pickers, The Claude Thornhill Band And The Mile Davis Nonet, Max Keller, Avisha Cohen, Guy Mintus,  Yaron Herman, and, of course our own Steve Bewick and Olivia Moore.  So, too are Django Reinhardt and Stefan Grapelli, Leonard Bernstein, Het Ramblers Dancorquest and Caravan and Duke Ellington. We had Georgie Fame, Jacques Loussier, Earl Hines and Keith Tippett

Also looking in on our festival from The Canary Islands were Kike Perdomo, Alexis Lemes, Pablo and Humberto, and Orquesta De Jazz Del Atlantico who are all deserving of Blue Plaques. Tommy Cummins led a fringe alt-jazz-fest that included The Skatoons, The Rat Pack, Madness, Neil Diamond, David Sanborn and Grover Washington Junior. Blue Plaques for them all.

Meanwhile, we are exploring ways of getting a playlist, called Blue Plaque Players, of one track per artist up into the Mix-cloud, so watch this space. Sidetracks & Detours also have several more jazz based articles in the pipeline for 2021. Our joined up jazz journalists will be meeting soon to discuss the viability of podcasts on leading players, new releases and samples from our archives.