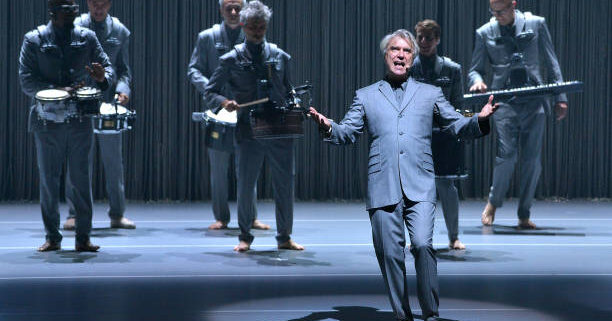 Talking Heads frontman David Byrne, in Don’t Worry About The Government, jokes about the pleasure of pausing the work day to entertain the company of ´loved ones´ who, like ´civil servants,´(wink, wink) ´work so hard and try to be strong.´

As remembered, and interpreted by journalist Adesola Thomas the track is sentimental without being saccharine, and sonically. It has, she says, allowed her to occasionally re-enter a world that has been deemed mostly inaccessible due to necessary pandemic restrictions—a world in which she marvels at ´the clouds that move across the sky´ and conjure gratitude for ´people that are working for (her).´

Nevertheless as she revisited the song after the recent insurrection in The White House and again when hearing about the “civil servant” at the State Department, who prematurely issued an ´out of office´ announce about Trump and his VP, Adesola couldn’t help but wonder: is Don’t Worry About The Government truly an optimistic ditty about anchoring your joy in moments of levity and cultivating respect for community members? Or is it an ironic song about needing to distract ourselves from the frustrating limitations of our institutions?

Adesola Thomas  graduated with high honours from Emory University in May of 2020 with a double major in Political Science and English. She is enthusiastic and highly effective at synthesizing the relationship between politics and popular culture in arts journalism and academic style writing. Adesola is interested in the intersection between public policy, political dialogue and the arts and whilst serving as a Creative Producer at Netflix Queue, after graduating from Ebony university, she is also an occasional contributor to Paste on-line magazine on subjects related to her interests. As a screenwriter and culture writer Adesola loves talking about Annette Benning’s performance in 20th Century Women, … and making lasagna.

´Music is implicitly or otherwise political,´ she says´, referencing her Talking Heads article. ´It reflects the varied ways personal experience shapes our perceptions of the world, how people navigate those perceptions and exercise their agency. What’s so political about the Baha Men’s calypso earworm “Who Lets the Dogs Out,” or contrastingly, Baby Keem’s laid back cunnilingus-centric banger “Orange Soda”?

She´ll be glad you asked because although this article was about the Talking Heads and the resonance of their music as President-elect Joe Biden took office, Adesola further illustrated the presence of political power in all music, with a sideways glance at those two songs..

´While we attribute Who Let The Dogs Out to the Baha Men, they did not originally release the song,´ she told Paste readers. ´In fact, filmmaker Ben Sisto made an entire documentary about how the song, which has been released multiple times over the past 40 years by various artists, presents ´one of the most complicated … copyrighting cases in music history.

So we are mostly unsure who first let the dogs out, and why people were so receptive to the question when it was presented for the umpteenth time by Carribean men in Hawaiian shirts. The politics of the song exist via its marketing and ownership context.´

She has a way with words for making a point doesn´t she?

´As for Orange Soda,´ she continued, ´that was a rap staple of 2020, there’s a legacy of the link between Black masculinized sexual prowess and the focalization of female pleasure in rap and hip-hop culture. So when Baby Keem says “Bitch sit on my face I attack that,” not only is the speaker instigating oral sex, he is tethering his bravado to his interest in centering his partner’s fulfillment. These are the gendered and racialized politics of desire.´

Our readers here at Sidetracks & Detours are probably of a lightly older age-demographic than are Adesola´s usual reader base, and might therefore be wondering how this logic can applied to Don’t Worry About the Government. We have to focus, Adesola says, ´not only on what Byrne sings, but also on the multiplicity of things those lyrics gesture towards and ultimately, evoke for listeners. Perhaps it is less important to deliberately pinpoint whether this Talking Heads song was designed to be sincere or biting, and more important to consider why the tension within that question may be the point.´

Adesola argues that ´when Byrne sings, ´I’m a lucky to live in my building´ and ´My building has every convenience / It’s gonna make life easy for me,´ he could be voicing the satisfaction that accompanies having a reliable place of one’s own, or he could be voicing the empty measurements of personal worth America generationally ascribes to convenience and property ownership.´

Fans familiar with Talking Heads´ material will recall the song´s movement from the nature scene in the song’s opening stanza with the fragrant ´pine trees´ and ´peaches in the woods´ to the ´highway that goes to the building´ signals a shift in environment that could be a celebration of urban sprawl or sequestration away from that which is intrinsic or natural.

´The building in that latter reading,´ says Adesola, ´then becomes a distancing element from loved ones, rather than a place of pure communion for the speaker.´

She believes that, rather than cancelling each other out, all of them allow the song to offer something new with nearly every listen.

¨During some listens, perhaps we resonate more with the joy of the loved one that is visiting the speaker who lives in the proverbial building,´ she suggests but the she switches the argument.

´Maybe during other listens, Byrne’s ´It’s gonna make life easy for me´ harkens back to times when we’ve naively believed that a new apartment or city, newfound wealth or status, or Presidential administration would help us fulfill our (or their?) idealized version of personhood or citizenship. We are not tasked to select the ironic bits over the sincere bits or vice versa because all of those things are overlaid and interwoven. They sit inside the same song, waiting to be seen from each and every purview.´

Adesola reckons that the beauty of Don’t Worry About The Government and its political design, deliberately or otherwise, is that it echoes the possibilities the listener hears inside of it. Its majesty is in the riddle of its aims. And for the three-or-so minutes of the song’s duration, she is enraptured by the nature scenes, the highway, the clouds, the building, the civil servants in D.C and the puzzle at the heart of the song.

´Paradoxically, for those few delectable, fleeting moments,´ she says, I stop worrying about the government.´´

That is how a panacea works, isn´t it? As opium for the masses?

STANDING BETWEEN ART AND ARTIST