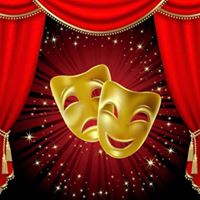 We saw a couple of lavish, national touring company productions of this Andrew Lloyd Webber and Time Rice musical during the last forty years in the UK before retiring here,  and have the film version, of course, in our DVD collection.  We even took in an earlier Spanish production at Teatro St. Bartolome when on holiday here some years ago.

We guessed that by now that we had examined every aspect of the life and motivations of Eva Peron. We had drawn parallels around ´Evita´s´ public acclaim and press coverage, into eventual decline, with that of Princess Diana.

However, a couple of years ago, the most production we have seen, for English people at least, took on another shade, too, reminding us of the then-current outpouring of affection for the new Princess Meghan and the sudden re-alignment of media attitudes, towards her family and apparent rift with her in-law royals, creating a less favourable image and affecting public opinion. How differently we might rad that version of Evita these days.

What a production this was, though, by a small provincial theatre company here on Lanzarote. There were finely nuanced performances here from the three major characters of the piece; Eva herself, Juan Peron and Che, the itinerant observer and narrator, painting a slightly different hue over these three people we thought we thought by now we completely understood. By his movements, and the subtlety of delivery in his singing, Che became something more of a mischievous agitator than I had recognised from previous productions.

Evita constantly gave us pause to look again at her relationship with the shirtless ones, as the poverty stricken of ´her´ country were known.

There were suggestions in the direction of this show that her sympathy for them might have been a lot more genuine than shown in other productions, including the celebrated film version.

Peron himself seems to have been painted by Webber and Rice and other historians as the weaker member of the partnership with Evita, and perhaps as increasingly jealous of the worship of his wife by a demographic element of his country. However, a tender and gentle death scene on this presentation by Compania Teatral Chespir suggested their love affair was somewhat more substantial than the history books show.

Jereboam Tejera played Peron brilliantly as man amongst men; the first among equals in the company of his political colleagues and advisers. His voice soared over the audience of Teatro Tias and out into the streets. He performed with the massive stage-presence required of a leader of a country, and sang perfectly both in and out of company of his fellow cast members.

Gloria Supulveda cleverly showed Evita to be scheming and mischievous in her early days, and more than willing to use her sexual attractiveness to convert people to her way of thinking. A wonderfully directed, choreographed and acted scene, which showed her changing in and out of increasingly expensive outfits revealed not only her thirst for glamour but somehow also her conviction that being so dressed offered aspirations to those who had never experienced such hope.

Throughout this production of Evita this condensed biography, of a woman who came almost to be deified by the people she rose above, revealed the turmoil of this period of Argentina´s history, and hinted at marital tensions.

Jose M Clar´s delivery in the role of Che was crucial to this telling, and at times he seemed in angry disbelief of the way the country were responding blindly to the corruption and deceit that he constantly observed and identified.

Like all Lloyd Webber and Rice musicals, Evita was written as a rock opera concept album. I bought this 1976 album immediately on its release, largely because I was a huge fan of the singer / actress playing Evita on this recording. Julie Covington had played a lead role as a nineteen sixties rock chick on the British tv series of Rock Follies (that had also brought Rula Lenska to fame), and Julie´s remains my favourite ´version´ of Eva Peron.

The subsequent stage adaptations have given us various interpretations of the character by some great actresses and singers, with Elaine Page becoming perhaps most associated with the show that has won awards both in the West End and on Broadway.

Even since the 1996 film creation of Evita, starring Madonna and Antonio Banderas, there have been further adaptations of the stage musical and it has enjoyed successful revivals in the major theatrical centres over the last ten years. Evita enjoyed more than fifty showings at The Dominion Theatre in London, as recently as September 2014.

Of course, there have been many adaptations, too, by smaller repertory and touring companies, but surely few can have been as interestingly adapted and delivered as this in the Teatro Tias. This was an obviously well-honed performance with orchestra and vocalists in perfect sync, which is vital to a musical offering so many memorable melodies.

If the refrain is perhaps repeated too often, (Lloyd Webber loves his musical motifs, doesn´t he?) there is still a wealth of great music to accompany those signature bars of Don´t Cry For Me Argentina, sung with myriad emotions here by the excellent. A girl from the chorus gave a wonderful solo performance of Another Suitcase that became a folksy little number here, with excellent guitar picking from the orchestra.

We were taken, On This Night Of  A Thousand Stars, as if it were we the audience that was High Flying, Adored, above brightly lit cities and the darkness of poverty that lay in their shadows in Peron´s Argentina.

Lighting for this show beamed from a garish neon to darkly subdued, perhaps also reminding us of the gap between the flare of wealth  and the fear of the impoverished in the country at that time.

photo 8 In this production the country throbbed to Latin beats and to dramatic gender-issues tangoes in what were shown as dances with the devil. Guided by ¨Dance Captain´ Reinier Alfonso, the choreography, throughout the show was vibrant and entertaining but with an undercurrent that kept us constantly reminded of the social issues of Argentina at the time and of the somewhat chaotic marital partnership that seemed to be governing the country.

The costume department, under the leadership of Lourdes Bermejo, had clearly given some thought to this production´s underlying message, so clothing, too, in its styles of merry and military, fabulous and functional, reflected fashion on either side of the poverty line.

The stage was a versatile one-set affair that miraculously became both a veranda from which political promises were offered, and a street along which those broken promises were blown with the litter and detritus of the day. That street, though, seemed alive with adoration of Santa Evita and a hope for better days.

All this energy was created by a cast of only a handful of major characters and a chorus of no more than a dozen or so. All of them, though, delivered dances with both a dramatic and a comedic element, including a lovely piece of schtick which saw dancers frequently ´shuffle´ in and out of view. All of this was performed to exciting percussive accompaniment.

The orchestra gave us many magic moments, not least that gorgeous interpretation of Another Suitcase, the soaring melody that is Don´t Cry For Me and the jaunty Oh What A Circus, and were expertly led by their director, Mauro Farina.

This was a top line national production in a suburban theatre. For only 20 euros a ticket the show played to a very nearly full house here on its second night. Although we arrived a little later than we usually leave it for events such as this we had purchased our tickets in advance and were able to park opposite the Teatro and take a leisurely stroll across the road and into the auditorium, through streets festooned with Christmas lights. Somehow, as we noticed people approaching the venue from all corners of the town, I was reminded of the Lowry paining, Going To The Match, which showed his match-stalk men on the way to watch Bolton Wanderers play at the now demolished Burnden Park. Strangely, I had the same excitement and expectation heading for the theatre that I used to have when going to work at Wanderers every home match day for twenty five years.

Two hours later I was on my feet applauding the ´musicos´ as they took centre stage for massive, warm applause from the crowd for their special performance. Their playing had been an integral part of this performance, contributing to its drama and its comedy and its fizzing energy. They and the ballerinas, the dancers, the choral singers and the lead individuals had formed the perfect team to give the perfect performance. A lot like the old Bolton Wanderers, really!

There were two helpful programme notes, albeit in Spanish, that I read and tried to translate as soon as we arrived home. One explained the near deification of Eva Peron and the other explained Che as a narrator speaking in the voice of protest in Argentina at the time. It was the back-page, though, that reminded us just why we always try to catch a performance of Evita, or really any other Andrew Lloyd Webber and Tim Rice creation. Listed on the page, in Spanish, were the twenty four pieces of music that provide the narrative for this show. All are instantly hummable, and it seemed as if everyone leaving the theatre was humming their own particular preference.

All of those provided full justification to those organisations who had sponsored this touring production. These included Al Excmo Cabildo

Compania Teatral Chespir, and sponsors,… we thank you!

A SONG IN THE HEAD