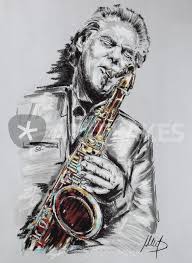 MUSIC THAT MATTERS TO ME

The sharp-edged tone, long, keening, sustained notes, and generous use of silence of Norwegian jazz saxophonist Jan Garbarek provides the perfect soundtrack for a walk on the misty, dank moors my town with the gull’s screaming and the geese honking. It is also efficacious in creating mind images and mood changes regardless of geographical location.

As a composer, Jan Garbarek draws heavily from Scandinavian folk melody deploying silence as well as sound, striking rhythmic figures and achingly beautiful phrases. Jan Garbarek’s sound is one of the hallmarks of the ECM Records label, which has released virtually all his recordings.

is also a pioneer of ambient jazz composition, most notably on his 1976 album Dis, a collaboration with guitarist Ralph Towner that featured the distinctive sound of a wind harp on several tracks. This textural approach rejects traditional notions of thematic improvisation (best exemplified by Sonny Rollins), in favour of a style described by critics Richard Cook and Brian Morton as ‘sculptural in its impact’.

Among other of his experiments he has included setting a collection of poems by Olav H. Hauge to music, with a single saxophone complementing a full mixed choir. He has also recorded to great effect with The Hillard Ensemble on such recordings as Officium, Officium Nova and Mnemosyne.

Jan Garbarek explores what happens when an improvisatory instrumental voice (saxophone) is placed into the world of early vocal music, which has elements of both improvisation and formal structure.

It’s an adventure in which the four male voices of The Hilliard Ensemble travel the 14th and 15th-century territory of Morales and Dufay, visit the 12th-century Pérotin and roam even earlier ages of plainchant, accompanied by the always sensitive and tasteful, often astonishing, saxophone improvisations of jazz master Jan Garbarek. Sometimes, these new melodies simply accompany; sometimes they transform the common, a routine minor chord, for instance, into the most sublime, indescribable moment.

For me, It’s OK To Listen To The Grey Voice is perhaps Garbarek’s most wonderful album: atmospheric, mysterious and at the same time passionate. All pieces on the record are titled after quotes from poems by Tomas Tranströmer, who was awarded the Nobel Prize for Literature in 2011. Tranströmer also plays the piano (which informs the imagery of some of his poems) and composers have, since 1990, written left-hand piano pieces especially for him to play, because of the stroke in that year which deprived him of most of his speech and partly inhibited movement on his right-hand side.

The independent record label ECM, Edition of Contemporary Music, was founded by producer Manfred Eicher in Munich in 1969, and to date has issued more than 1,500 recordings.

From the beginning Manfred Eicher saw himself as a recording producer actively involved with the musical events in the studio. In his hands the label’s iconic sound and artistic appearance, its imagery and typographical design, received a unique and unmistakable touch.

‘Music is the centre of my life’, Manfred Eicher once said. ‘It is the essential core; everything else radiates from it, and to there I always return: to the concert halls, churches and studios. Music is my vocation: recording sessions should have a unique atmosphere that kindles a desire to change something or, if necessary, to make it better, more perfect. For instance, to question things, to depart from procedures devised during rehearsals, things that were good enough in concert, but which change in the solitude of a recording studio, where they are focused on other ears and require transformation.’

If you haven’t already I urge you to have a listen to Jan Garbarek, and also to explore the amazingly eclectic but both intellectually challenging and rewarding ECM catalogue.

Memories Opened in lockdown of JAZZ ON A SUNDAY