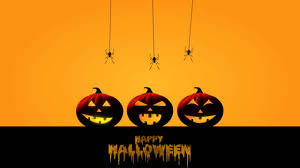 They are only children, enjoying a night of mild mischief, knocking at your door in the dark and very politely demanding cake or biscuits. Such calls made at Halloween in American might see that request for a treat being accompanied by the threat of a trick, and other countries like the UK have more recently adapted that attitude too. Halloween remains, though, a piece of tradition celebrated by pumpkin faces and lanterns. Witchcraft ? Surely not.

Lanzarote has celebrated pagan rituals for centuries, and has continued to do so, in admittedly milder form, even since early practitioners suffered the ordeal of the Spanish Inquisition.

Geographically, of course, our island stands at an angle of the triangle of Europe, Africa and America converge, so it is perhaps not surprising that the history of the Canary Islands is full of deep-rooted pagan Halloween practice, mysterious and magical and riddled with ancestral rituals.

These were often the cause of such concern and suspicion that the traditionalist Catholic Church of the 16th to 18th centuries condemned them as irreligious.

Any single, or independent women suggesting how herbs might be used in the preparation of healing, or pain-releiving ointments or potions were deemed, as far as the Inquisition was concerned, to be witches. and were relentlessly persecuted so as to root out such practices.  History reveals that hundreds of Lanzarote women were charged with witchcraft practice and after ´trial´ had been held, more than 50 were executed by hanging, though contrary to what has  become urban myth, no one was ever burnt at the stake in Spain.

All this is explained by Canarian write Josè Ramón Navas, a writer I have featured previously on these pages, as well as in my daily blog at Sidetracks & Detours.

He has been featured in a couple of editions of Vivia Lanzarote. José, the author of a trilogy of books about witchcraft in the islands, La Habitacion Alochada told that magazine that ´The story of Lucia de Cabrera was one of the best known in Lanzarote at the end of the 16th century, as it coincided with the so-called ´Lanzarote witch-hunt´ which began in 1581.

According to the writer, the Inquisition implemented measures to control the number of pagan rituals practised on the island that had been passed down from the ancient inhabitants, the Mahos.  Sadly, human-kind doesn´t always learn from history. There is a documented report of a case involving a sixteen year old girl, named Lucia, who killed her father and brother who had abused her.  After hours and days of inhumane torture, she finally confessed to practising witchcraft.

José Ramon Navas reminds us that before being executed in Gran Canaria, she said ´I have been condemned by a court of men, but it is humanity that is condemned.´

History records that she said this proceeding to utter insults and curses and then stripping naked as if that were further proof of her guilt and somehow rendered her comment as invalid, and yet there was a huge witch-hunt in my home town of Rochdale in the latter part of the twentieth century. It felt to me as if a town turned paranoid by whispers of political and moral corruption began to seek an almost inhuman explanation.

José writes that ´Since ancient times, young, unmarried women were taken away to caves where they were educated as priestesses.  They performed ritual dances linked to the full moon of the summer solstice (Beñesmén).´

Over time, these caves became known as bailaderos. The locations of these ´dancing places´ can still be found on the island. I´m told there is one near Orzola, for instance, and others, which are also linked to witchcraft, can be found in Yaiza and Uga in the South of the island. There is also a street called in Teguise, ´Bailadero de las Brujas,´ which commemorates those times.

Nowadays, Halloween is a holiday celebrated each year on October 31, and Halloween 2020 will occur on Saturday, October 31. The tradition originated with the ancient Celtic festival of Samhain, for which people would light bonfires and wear costumes ´to ward off ghosts.´ As early as the eighth century, Pope Gregory III designated November 1 as a time to honour all saints. Soon, All Saints Day incorporated some of the traditions of Samhain, and like other many Christian holidays, the All Saints Day celebrations clung to various remnants of Pagan beliefs.  The evening before was known as All Hallows Eve, and later Halloween. Over time, Halloween evolved into a day of activities, particularly in America, like trick-or-treating, carving jack-o-lanterns, festive gatherings, donning costumes and eating treats.

The origins of all this were laid down 2,000 years ago, mostly in the area that is now Ireland, when the United Kingdom and northern France, celebrated their new year on November 1.

This day marked the end of summer and the harvest and the beginning of the dark, cold winter, a time of year that was often associated with human death. Celts believed that on the very eve of the new year, the boundary between the worlds of the living and the dead became blurred. Samhain, on the night of October 31, was seen as a celebration of  the ghosts of the dead returning to earth.

In addition to, Although Celts thought that the presence of the otherworldly spirits caused occasional trouble and damaged crops they also believed the spirits made it easier for the Druids, (Celtic Priests), to make predictions about the future.

people were entirely dependent on the volatile natural world, and such prophecies were, therefore, an important source of comfort during the long, dark winter.

To commemorate the event, Druids built huge sacred bonfires, around which people gathered to burn crops and animals as sacrifices to Celtic deities. During the celebration, the Celts donned costumes, typically consisting of animal heads and skins, and attempted to tell each other’s fortunes.

When the celebration was over, they re-lit their hearth fires, which they had extinguished earlier that evening, from the sacred bonfire to help protect them during the coming winter.

All that sounds far removed from the fact that today a quarter of all the candy sold annually in the U.S. is purchased for Halloween.

During the four hundred year Roman rule, that ended in around 450 AD two festivals of Roman origin were combined with the traditional Celtic celebration of Samhain.

Feralia, a day in late October saw the Romans traditionally commemorating the passing of the dead.

A second festival incorporated into Samhain was to honour Pomona, the Roman goddess of fruit and trees. The symbol of Pomona is the apple, and the incorporation of this celebration into Samhain probably explains the tradition of bobbing for apples that is practiced today on Halloween.

It was to be another one hundred and fifty years or so before, on May 13, 609 A.D., Pope Boniface IV, dedicated the Pantheon in Rome in honour of all Christian martyrs, and the Catholic feast of All Martyrs Day was established in the Western church. Pope Gregory III later expanded the festival to include all saints as well as all martyrs, and moved the observance from May 13 to November 1.

By the 9th century, when the influence of Christianity had spread into Celtic lands, it gradually blended with and supplanted older Celtic rites. In 1000 A.D., the church made November 2 All Souls’ Day, a day to honour the dead. It’s widely believed today that the church was attempting to replace the Celtic festival of the dead with a related, church-sanctioned holiday.

All Souls’ Day was celebrated similarly to Samhain, with big bonfires, parades and dressing up in costumes as saints, angels and devils. The All Saints’ Day celebration was also called All-hallows or All-hallowmas and the night before it, the traditional night of Samhain in the Celtic religion, began to be called All-Hallows Eve and, eventually, Halloween.

As the beliefs and customs of different European ethnic groups and the American Indians meshed, a distinctly American version of Halloween began to emerge. These included play parties, which were public events held to celebrate the harvest. Neighbours would share stories of the dead, tell each other’s fortunes, dance and sing.

Colonial Halloween festivities also featured the telling of ghost stories and mischief-making of all kinds. By the middle of the 19th century, annual autumn festivities were common, but Halloween was not yet celebrated everywhere in the country.

As migration has increased so profusely in the past couple of hundred years, so diaspora and cultural influences have grown. In the second half of the 19th century, for instance, America was flooded with new immigrants. These included millions of Irish fleeing the Irish Potato Famine, who helped to popularize the celebration of Halloween nationally.

Borrowing from European traditions, Americans began to dress up in costumes and go house to house asking for food or money, a practice that eventually became today’s “trick-or-treat” tradition.

Young women believed that on Halloween they could divine the name or appearance of their future husband by doing tricks with yarn, apple parings or mirrors.

In the late 1800s, there was a move in America to mould Halloween into a holiday more about community and neighbourly get-togethers than about ghosts, pranks and witchcraft. At the turn of the century, Halloween parties for both children and adults became the most common way to celebrate the day. Parties focused on games, foods of the season and festive costumes.

Parents were encouraged by newspapers and community leaders to take anything “frightening” or “grotesque” out of Halloween celebrations. Because of these efforts, Halloween lost most of its superstitious and religious overtones by the beginning of the twentieth century.

By the 1920s and 1930s, Halloween had become a secular but community-centred holiday, with parades and town-wide Halloween parties as the featured entertainment. Nevertheless, despite the best efforts of many schools and communities, vandalism began to plague some celebrations in many communities during this time.

By the 1950s, town leaders had successfully limited vandalism and Halloween had evolved into a holiday directed mainly at the young. Due to the high numbers of young American children during the fifties baby boom, parties moved from town civic centres into the classroom or home, where they could be more easily accommodated.

The centuries-old practice of trick-or-treating had also been revived and trick-or-treating became a relatively inexpensive way for an entire community to share the Halloween celebration. In theory, families could also prevent tricks being played on them by providing the neighbourhood children with small treats.

Throughout Britain, Halloween has traditionally been celebrated by children’s games such as bobbing for apples in containers full of water, telling ghost stories and the carving of faces into hollowed-out vegetables such as swedes and turnips. These faces would usually be illuminated from within by a candle, the lanterns displayed on window sills to ward off any evil spirits. The current use of pumpkins is a relatively modern innovation imported from the United States, and we can also extend the same debt of gratitude to our friends in America for that quaint trick-or-treat tradition!

Covid restrictions in the UK and, too, here on Lanzarote, might mean not as many children knock on your door at Halloween this year.

Nevertheless, with every caramelo you hand over this year during Halloween you will be taking part in a two thousand year tradition that has taken many twists and turns along its way., but might never have seen a year as strange as 2020.

Was that someone knocking at the door?