Blog
You are here: Home1 / Blog2 / AATA3 / NO MILLION DOLLAR BASH FOR McCARTNEY 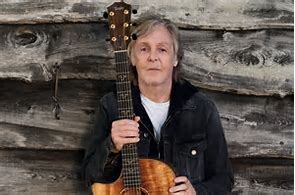 Sir Elton John and Sir Rod Stewart have earned tens of millions of dollars playing at the Nevada city, but former Beatle Paul McCartney has no intention of taking up a residency on the famous strip.

In an interview Sir Paul, who celebrated his 78th birthday during lockdown, revealed to British GQ that he has ‘not really’ thought about performing solo residencies.

He then went somewhat further, and elaborated by saying ‘That’s been something I’ve been trying to avoid my whole life. Definitely nothing attracts me about the idea.  Vegas is where you go to die, isn’t it? It’s the elephants’ graveyard.’

Whatever the truth of that statement Vegas remains a place where musicians who take residencies at a single venue, are contracted to perform regular shows there and take a substantial cut of the earnings.

Sir Elton reportedly racked up a staggering $297million at the box office in Las Vegas during his two residencies, the Times reported. He sold tickets worth $166 million from 2004 until 2009 and a further $131 million during his Million Dollar Piano show from 2011 until 2018.

That beats passing the hat round at the Gallows folk club in Rochdale as Colin Lever and I used to do in Lendanear forty odd years ago, and Vegas never came calling.

A few years ago I worked at a concert to 20,000 people given by Lulu and Sir Elton at what was then The Reebok Stadium of Bolton Wanderers, a (then) premiership side. A few years later Sir Elton was speaking about the ground-breaking nature of his first show in Vegas, The Red Piano, and how it ‘changed the image of Las Vegas a little’ after he initially was not sure if he wanted to do the residency.

Broadcaster and author Paul Gambaccini said Sir Elton used to have a similar opinion to Sir Paul about Las Vegas, but has changed his mind in the last ten years.

The broadcaster told The Times: ‘In 1973 I did an interview with Elton for Rolling Stone. In it he gave a similar thought to Paul. But of course in the last ten years he has had the record-breaking seasons in Las Vegas.’

Some of the world’s biggest stars, including Frank Sinatra, Elvis Presley and Cher, have played residencies at Las Vegas.

Photo 3 His earnings were subsequently beaten by Celine Dion, who retired from her two residencies last year after making $681million from 2013 until 2019. Performers are normally limited to 90 minute performances by the casinos, who make money back on the gaming floors.

John Meglen, Dion’s promoter, recalled: ‘Everybody thought we were crazy [because it] was kind of a place you went on the downside of your career.’

Gambaccini is aware of that, but reasoned that ‘what Paul is saying represents the mind-set of his generation, because every person in the 1960s thought that Vegas was for unhip people not making hits any more.’

He added, ´the reputation of Vegas massively changed from being somewhere rock stars go when they are ‘washed up’ when the Caesar’s Palace casino built a theatre for Celine Dion.

Sir Paul also told GQ that he is reluctant to do a residency on Broadway, like Bruce Springsteen did, as he does not want to just ‘follow a trend’.

He said: ‘The idea is OK, but I think I’d just prefer to play with the band to a bigger audience, or even (to a) smaller (audience) – I don’t mind little clubs. I do a solo segment in the middle of my shows at the moment and to do a whole show like that, I’m not sure I fancy it.’

This comes as Sir Paul McCartney also revealed he found it ‘pretty hurtful’ when he was blamed for breaking up the Beatles when the group parted ways in 1970.

Reflecting on the misconceptions he faced during his time with the band, the singer, 78, also spoke candidly on that subject, too, with British GQ.

He acknowledged that many people believed the band – which also consisted of John Lennon, George Harrison and Ringo Starr – ‘hated each other’ after their split, Sir Paul likened the group to simply having ‘disputes’ like any other family would.

So I think what came about after that … the only way for me to save the Beatles and Apple – and to release Get Back by Peter Jackson and which allowed us to release Anthology and all these great re-masters of all the great Beatles records – was to sue the band.

‘If I hadn’t done that, it would have all belonged to Allen Klein. The only way I was given to get us out of that was to do what I did. I said ´Well, I’ll sue Allen Klein,” and I was told I couldn’t because he wasn’t party to it. ´you’ve got to sue the Beatles´, I was told.

Sir Paul’s decision led to tensions between the former members, with John even writing his song How Do You Sleep? which overtly referenced his former band mate, creating even more ‘hurtful’ misconceptions.

‘I remember reading an article, an interview with Yoko, (left, with John) who, OK, she was a big John supporter, I get that, but in this article she goes, Paul did nothing. All he ever did was book studio, Sir Paul continued. And I’m going, Err? No… and then John does this famous song, How Do You Sleep?, and he’s going, “ll you ever did was ‘Yesterday… and I’m going, No, man.

But then you hear the stories from various angles and apparently people who were in the room when John was writing that, he was getting suggestions for the lyrics off Allen Klein.

So, you see the atmosphere of Let’s get Paul. Let’s nail him in a song… and those things were pretty hurtful.’

The Beatles, as a unit not only became one of the most influential bands of all time but their releases also made them the best-selling music act of all time.

Sir Paul went on, in his GQ interviuw,  to look at more contemporary musicians, as he discussed his mental health and admitted he was determined not to struggle with ‘self-loathing’.

He said: ‘I remember talking to Lady Gaga about something we were doing together … and she was saying Well, there’s the self-loathing.., and I think, Sh*t, that’s the first time I’ve ever heard anyone talk about that. And her, she was, like, at the top of her game, massively popular and everything she was doing was a hit, but she was just talking about self – loathing.

And I’m saying, “I kind of know what you mean, but I’m not allowing that. I’m not having that. It’s not a road I want to go down´.

But you do get it.

‘Any time you write a song, you’re going, This is crap. This is terrible. Come on. So I kick myself and say, Get it better. If it’s terrible, get it better.

And sometimes someone will come along, someone who you respect, and say, No, that’s great. Don’t worry about that, and then show you a side to it that you didn’t notice and then you’ll go, Oh yeah´.

The full article is featured in the September issue of British GQ, available via digital download and on newsstands.

Meanwhile, though, former Wings leader McCartney has just released a ´new´ album, albeit a re-invented version of Flaming Pie in all types of formats and compilations.

Sir Paul McCartney has also recently spoken about the first time he met John Lennon and revealed how he now reflects on the moment ‘like a fan’ and tells ‘how lucky’ he was to meet him.

He recalled how the pair ‘complemented each other’ after he was introduced to John, aged 16, on July 6 1957, in Liverpool.

The singer-songwriter spoke to Sean Ono Lennon, 44, the son of John Lennon and Yoko Ono, for a two-part documentary on BBC Radio 2, to mark John Lennon At 80.

McCartney spoke to the Daily Mail on 21st September 2020 about that first meeting and revealed how he ´looks back on it now like a fan, how lucky was I to meet this strange teddy boy off the bus, who played music like I did and we got together and boy, we complemented each other!’

Paul nevertheless admitted ‘there were a few songs that weren’t very good’ during his writing partnership with John, you know, clearly by young songwriters who don’t know how to do it’.