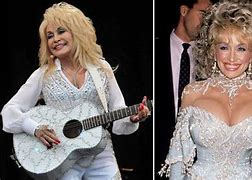 Despite her own song-writing talents, Dolly Parton has, nevertheless, lent her distinct vocals to plenty of cover recordings of material by her fellow song-smiths. The Tennessee native has recorded and performed dozens of hits by other famous artists in the last 50-plus years, including everyone from The Beatles to Jackie Wilson to George Jones.

Below is a selection of some of the best Dolly Parton live covers, some of which have also appeared on her albums over the years.

Even in her early years, Dolly Parton was quick to cover other great artists outside the country genre. Her take on The Beatles’ hit Help! is the perfect example of how easily Parton can adapt songs to her own style.

Dolly’s cover of Love Will Keep Us Together doesn’t stray too far from the rendition made famous by Captain and Tennille, but her vocals really shine on her version, which was recorded on the set of her 1970s TV series. Dolly!

John Denver’s Thank God I’m a Country Boy is a classic in the genre, so it was a natural for Dolly to introduce it into her repertoire – with her own little spin.

At the 1992 CMA Awards, Parton delivered a stirring rendition of Jackie DeShannon’s 1969 pop hit Put a Little Love in Your Heart. With backing from the Christ Church Choir, this live cover packs an extra punch.

Jackie DeShannon is an American singer-songwriter with a string of hit song credits from the 1960s onwards, as both singer and composer. She was one of the first female singer-songwriters of the rock ‘n’ roll period. She is best known as the singer of What the World Needs Now Is Love and Put a Little Love in Your Heart. She is also the composer of Walk In The Room, a hit in the Uk for The Searchers back in the day, and Bette Davis Eyes, made famous by Kim Carnes,. Since 2009, DeShannon has been an entertainment broadcast correspondent reporting Beatles band members’ news for the radio program Breakfast With The Beatles.

Some of Parton’s legacy has been created by her branching out into gospel music, and her cover of Neil Diamond’s Brother Love’s Traveling Salvation Show plays into her own personal history with religion. Listen to this cover to hear her own gospel twist on the folk hit.

A cover of Don’t Think Twice, It’s Alright was originally featured on Dolly’s 2014 album Blue Smoke. In recent years Parton has included her own live version of the Bob Dylan.

Not even ‘80s hits can trip up the Queen of Country. Parton’s live performance of the Fine Young Cannibals’ 1989 No. 1 single She Drives Me Crazy, featuring a unique bluegrass-inspired ending. This is a classic on her concert set-lists

Fine Young Cannibals (left) were a British rock band formed in Birmingham, England, in 1984, by bassist David Steele, guitarist Andy Cox, and singer Roland Gift. Their self-titled 1985 debut album contained Johnny Come Home and a cover of Suspicious Minds, two songs that were top 40 hits in the UK, Canada, Australia and many European countries. Their 1989 album, The Raw & The Cooked, topped the UK and US album charts, and contained their two Billboard Hot 100 number ones: She Drives Me Crazy and Good Thing.

Over the years Dolly has paid tribute to fellow country greats time and time again, and George Jones is no exception. Accompanied by Keith Urban and Vince Gill, Parton covered his He Stopped Loving Her Today during a performance at the Country Music Hall of Fame.

Parton’s infectious smile and bright personality are also a perfect fit with Katrina and the Waves’ peppy hit Walking on Sunshine. There is a video on You Tube taken from her TV special supporting her 1996 covers album, Treasures.

Another entry off her cover album Those Were the Days, Dolly’s rendition of Me and Bobby McGee pays tribute to her long-time friend and collaborator Kris Kristofferson.

Rockabilly great Jerry Lee Lewis is well-known for his spirited live performances, but Parton’s cover of his enduring single “Great Balls of Fire´´ lives up to the rock legend’s legacy.

Many artists have covered s big hit recorded by the late Dusty Springfield. Son Of A Preacher Man as a Dolly Parton edition has an authentic twang to it. If you look closely, you can even see future bluegrass star Alison Krauss singing backup in a 1978 live clip available on on-line.

She also covered a song by a man I consider to be one of the greatest in the songwriters´ circle. Dolly had a hit with Hugh Moffatt´s song, Old Flames (Can´t Hold A Candle To You). I know that Hugh preaches and lives by the maxim that ´we must intend what we write for light years of travel´ and Dolly´s interpretation of the song and its subsequent commercial success certainly took it a long way along those light years.

Of course, when we think of Dolly Parton´s ability to turn her hand to covering other people´s songs with often her own unique interpretation, we should remember, too, how many of her fellow artists have covered her own songs.

Songs written by Parton and covered by other singers include Dagger Through The Heart by Sinead O’Connor, There’ll Always Be Music by Tina Turner, and I’m In No Condition by Hank Williams Jr. (via Second Hand Songs).´

We certainly shouldn´t forget the film title track (Working) 9 To 5 written as performed by Dolly and recorded by Sheena Easton and of course Jolene, recorded and / or performed live by artists such as Miley Cyrus and Patti Smith. Add to those names Kelly Clarkson Alison Krauss, The White Stripes and Olivia Newton John and Norah Jones, who has performed it in benefit concert and Laura Marling who has actually performed it with Mumford And Son.

The most famous song Dolly Parton has written still often comes as a surprise to people. I Will Always Love You was a regular inclusion of her live set from 1974 but it didn’t become a worldwide hit until Whitney Houston led the vocals in The Bodyguard (film with Kevin Costner) in 1992. According to some sources, Parton wrote it as a resignation letter to Porter Wagoner, when she was ready to leave the tv show he hosted and on which she was a regular fixture. The songstress reportedly played the song to Wagoner, who told Parton it was the best song she had ever written.

“I said, Well, you inspired it, she remembered on a podcast interview with WNYC public radio’s Jad Abumrad.

Still, as the late Steve Goodman once said in song, You Should Have Seen The One That Got Away.

Saying no to Elvis Presley when he asked to cover one of her biggest hits was one of the hardest things Dolly Parton has ever had to do.

The sassy but savvy country legend shut down the late singer’s plans to record a rendition of her ballad I Will Always Love You in the 1970s, because Elvis’ tough-talking manager, Colonel Tom Parker, insisted on taking half the publishing profits if his client released the track.

Dolly admitted her business smarts kicked in and she knew she had to turn down The King, but it wasn’t easy.

´That was one of the hardest things I ever had to do because I loved Elvis,´ Dolly once told Billboard in an interview.

´That was my most important copyright at the time. If it had been a new song, I might have considered it,´ she contemplated.

Dolly then credited her father for instilling in her a strong sense of financial responsibility.

She added, ´Even though my daddy didn’t get an education, my daddy was really smart in making deals and bargaining and how he raised a family like he did.´

Revealing she can still ´hear´ Elvis singing her song in her mind, Dolly said Elvis would have been a natural voice for the song: ´He would have sung it great,´ she suggested, “Can you imagine Elvis singing I Will Always Love You?´

When the track was recorded two decades later by Whitney Houston for the soundtrack to The Bodyguard it became a massive international hit, earning Parton millions !! Kerch-ing !!

My own favourite Dolly Parton song is Love is Like A Butterfly and although this is an articles of songs of others´ covered´ by Dolly´s and songs of Dolly´s ´covered´ by others, I don´t think anybody sings this quite like she does. Her voice is as gentle as the butterfly she describes.

That is not to denigrate others who have recorded or performed the song, such as Nana Mouskouri, the wonderful and fizzing Deanna Carter and Britain´s Michael Ball. And by the way, if anyone from the Ukelele Band in Rochdale is reading, you can find the chords on line ! With the zoom concerts becoming more frequent material like this might bring the virtual place down.