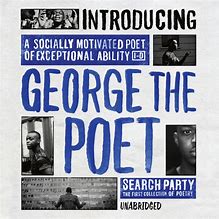 HAD I HEARD OF GEORGE THE POET?

I am pretty ashamed to say that until reading an extensive article in The Times about him, accompanied by a large photograph of him performing on stage, I had heard of neither Mr. Mpanga nor George The Poet. I was, however, drawn in to the article because I was reminded of previous interesting discussions I have had with my jazz presenter pal, Steve Bewick, about the tangled roots of jazz and rap.

We consider ourselves a blank canvas here at Sidetracks & Detours on which our contributors can talk Pollocks, Picassos or Peter Bruegel The Elders (right) as we published recently by Andrew Moorhouse. I can offer no excuse, then, for being so un-informed about George the Poet, other than to remind you that I am a sixty seven year old editor who for too many hours in the week is stuck in the editing office and never sees the light of day. And for far, far too many hours a week I am stuck in a bar with a beer by the beach where the ambient music is the Lanzarote folk lore of timples and other stringed instruments.

Reading that piece in The Times, though, I learned that Mpanga came to prominence as a poet, from which he progressed to spoken word and hip hop. He was signed by Island Records and subsequently released his debut EP. The Chicken and the Egg, to critical acclaim.

However, Mpanga, feeling constrained by the art form, had quit rapping and left his record label before the release of his debut album. He moved on to performing poetry and created a podcast entitled Have You Heard George’s Podcast?

In 2018, Mpanga was elected to be a Member of the National Council of Arts for Arts Council England. Have You Heard George’s Podcast? won five awards at the 2019 British Podcast Awards, including Podcast Of The Year, and a Peabody Award, becoming the first European podcast to win the award.

Mpanga was born to Ugandan parents on the St Raphael’s Estate in Neasden, north-west London. His paternal grandmother is Ugandan politician and former cabinet minister Joyce Mpanga. He began performing rap and grime when he was 15 years old whilst attending Queen Elizabeth’s School, Barnet, an elite selective grammar school, during 2002–2009. He subsequently studied Politics, Psychology and Sociology at King’s College, Cambridge (2010–2013), where he decided to adapt his rap output into poetry to ´communicate more effectively´ with his audience. Mpanga said, ´I think rappers are primarily expected to make money for the industry and provide party soundtracks, but obviously there are exceptions and grey areas. The poet’s ‘role’ is usually to provide thoughtful social commentary.´

During his studies, Mpanga won a social enterprise competition organised by Barclays and Channel 4, called The Stake, which asked entrants how they would spend £100,000. He used his £16,000 prize to fund The Jubilee Line, a series of secondary school poetry workshops for underprivileged children in London. In May 2012, he premiered the piece My City, about his hometown London.

Subsequently, BBC Radio 1 selected him as the face of their Hackney Weekend (in June 2012), and Sky Sports F1 commissioned him to write poems for their coverage of the 2012 Formula One season and the 2013 Monaco Grand Prix.

In July 2014, the consumer watchdog group Which? released the track It’s Yours, a collaboration between Mpanga and producer Jakwob, as part of a campaign lobbying the UK Government to improve their response to complaints about public services.

My City was adapted as a music collaboration with dance producers Bodhi, and released as a single in August 2014. In October 2014, Mpanga released the EP The Chicken and the Egg and the single “1,2,1,2” (once again with Bodhi), describing the former release as being ´about premature parenthood´. Through the story of a rocky relationship, it outlines the cycle of fatherlessness in seven tracks´. Vice magazine wrote that the EP ´showcases perhaps the tightest lyricism of the year to date´.

In November 2014, it was announced that Mpanga had been shortlisted for the Critics’ Choice category at the 2015 BRIT Awards. He came fifth in the BBC Sound of 2015 poll. As of late 2014, Mpanga was writing a debut album and working on theatre and film projects. He released the single Cat D in February 2015.

His first collection of poetry in book form, Search Party, was published by Virgin Books in 2015.

Mpanga opened the BBC coverage of the royal wedding, between Prince Harry (left with Mpango) and Megan Markle, by reading a love poem. (oh, right, ok, so I had been vaguely aware of him. I remember being impressed by that when seeing clips of the event on tv !) He has also appeared twice on Question Time. More recently, in 2019, Mpanga turned down an offer to become an MBE, citing the British Empire‘s treatment of his ancestral homeland, Uganda.

You may well be much more familiar than I am with the work of George the Poet but having listened to a few You Tube performances I have determined to catch up with his podcasts and to read his poetry in print. I will be starting at

Why not have a look for yourself at this very interesting artist?