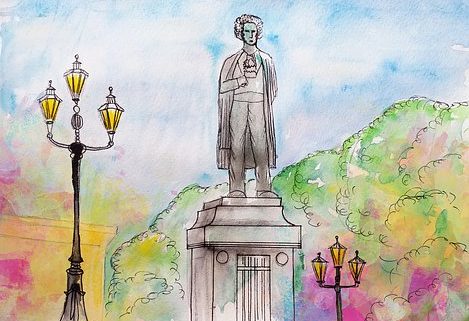 TWO CHOIRS AND A SCORE OF SONGS

Ian McMillan (born 21 January 1956) is an English poet, journalist, playwright, and broadcaster. He is known for his strong and distinctive Yorkshire accent and his incisive, friendly interview style on programmes such as BBC Radio 3‘s The Verb. He lives in Darfield, the village of his birth.

He attended Low Valley Junior School and, subsequently, Wath Grammar School. He graduated in Modern Studies from North Staffordshire Polytechnic in 1978. He started performing on the live poetry circuit in the 1970s. With several volumes of his own poetry published, for both adults and children, Ian is highly regarded as an enthusiastic advocate of poetry.

In addition he has had journalism published in the magazines Q and Mojo, and writes a weekly column in his home town’s local newspaper, The Barnsley Chronicle. He is styled “poet in residence” to his hometown football club Barnsley F.C. His play Sister Josephine Kicks the Habit, based on the work of fellow Yorkshireman Jake Thackray, premiered in 2005. In June 2010 McMillan was appointed poet-in-residence at the English National Opera.]

Ian McMillan wrote the libretto for The Arsonists, the world’s first opera written in a South Yorkshire dialect, which received its premiere on 18 November 2017.

He was the host of BBC Radio 4‘s literary quiz Booked!, broadcast between 1995 and 2000, and now hosts the weekly show The Verb and Proms variation Adverb on BBC Radio 3, dedicated to investigating spoken words around the globe´. He has been described in the BBC’s publication Radio Times as the ´22nd Most Powerful Person in Radio but who´s counting? He is also a regular roving contributor to Radio 4’s Today Programme where he was at one stage dubbed as the programme’s “Election Laureate”.

He co-wrote the Radio 4 comedy series Street and Lane with Dave Sheasby which first aired 2005–2007 and has since been repeated. During January 2007, he presented a BBC Radio 3 series on writing, Ian McMillan’s Writing Lab, in which he talked to a range of authors which included Julian Barnes, Mark Ravenhill, Howard Jacobson and Michael Rosen. He has also been a panellist on BBC Radio 4‘s long-running game show Just A Minute.

He is a frequent guest on The Review Show, The Mark Radcliffe Show, the Today programme, You and Yours, The Culture Show, Never Mind The Full Stops and Have I Got News for You. He has narrated three series of The Yorkshire Dales and the Lakes on More4 and also narrated The Museum on BBC 2 in 2007. He has also been employed to provide voice-overs in advertisements for a laundry detergent and a branded food product.

Ian is a regular judge of poetry competitions. In December 2006, McMillan judged the “Central Trains Poetry Competition” and the winners, from the Royal Grammar School Worcester, were awarded a signed copy of his poem “Take me on a Christmas Trip on Central Trains” at Birmingham Snow Hill station. He was also a judge in the Foyle Young Poets Awards 2008, and went as a teacher with the winners for a week to The Hurst, an Arvon centre based in Shropshire, as part of their prize. He judged the 2009 Cardiff International Poetry Competition for the award ceremony in June.

In 2005, as “Poet Laureate” for the Three Cities (of Nottingham, Leicester and Derby), he was involved in the “three Cities Create And Connect Scheme, which included a regional writing competition. The project resulted in a now-scarce publication, A Tale of 3 Cities : New Writing from Derby, Leicester and Nottingham. Ian contributed a foreword and two original pieces, Here, Now,Then and The Laureate Reflects as well as co-authoring (with six regional writers) Three Cities Chain Poem.

In 2007, Ian McMillan published a book named Collins Chelp and Chunter: a Guide to the Tyke Tongue. This was a compilation of words that are used in the Yorkshire dialect as well as a few pieces of Yorkshire humour and illustrations. The book received a negative review in the Transactions Of The Yorkshire Dialect Society in 2019, which noted that the work had an inconsistent orthography, assigned words to very specific locations when they were spread over wider areas and did not take account of the historical development of the dialect.

However, notwithstanding the above, in celebration of the UK’s 2012 National Pie Week, Ian McMillan wrote a ‘piem’ devoted to the creations of the ‘pie village’ of Denby Dale, which has produced several world record breaking pies over the last 250 years.

Seen, left, with his father, Andrew McMillan’s debut collection physical was the first ever poetry collection to win The Guardian First Book Award. The collection also won the Fenton Aldeburgh First Collection Prize, a Somerset Maugham Award (2016), an Eric Gregory Award (2016) and a Northern Writers’ award (2014). It was shortlisted for the Dylan Thomas Prize, the Costa Poetry Award, The Sunday Times Young Writer of the Year 2016, the Forward Prize for Best First Collection, the Roehampton Poetry Prize and the Polari First Book Prize. It was a Poetry Book Society Recommendation for Autumn 2015. In 2019 it was voted as one of the top 25 poetry books of the past 25 years by the Booksellers Association.

Following such early and stunning recognition, physical has most recently  been translated into Norwegian (Aschehoug, 2017), a bi-lingual French edition, Le Corps Des Hommes (Grasset, 2018) and Galician (A Chan da Polvora, 2019). His second collection, playtime, was published by Jonathan Cape in 2018; it was a Poetry Book Society Recommendation for Autumn 2018, a Poetry Book of the Month in both The Observer and The Telegraph, a Poetry Book of the Year in The Sunday Times and was shortlisted for the Polari Prize. He is senior lecturer at the Manchester Writing School at MMU and lives in Manchester.

Both Andrew and his dad, Ian,  were appearing at their second annual Rochdale Literature And Ideas Festival. On the previous occasion with Ian had given a talk and Andrew had presenting a workshop. This year, though, they worked collaboratively, each having been commissioned to write a poem for the Festival. These were then presented to musical conductor, composer, all round genius and nice guy, Michael Betteridge, who works not only with Cantare Ladies Choir but also with a more recently formed male ensemble known as The Sunday Boys.

He then set them to new music and each was given a debut during this performance. Both choirs beautifully delivered their attributed song, as well as several other ‘lyrical’ songs specially chosen by the poets. These included, in Ian’s set, sung by Cantare, From A Railway Carriage by Robert Louis Stevenson and I Will Give My Love An Apple, well known to many folkies and recorded by the likes of Joan Baez, Eadie Reeder and the late Kate Wolf. His selection also involved a World War One poem by Siegfried Sassoon. Everyone Sang perfectly echoed the stunning playlet delivered by Pulling Threads at the aata fringe the previous day.

Andrew’s choice, performed by The Sunday Boys, saw an adaptation of Yeats’ Down By The Salley Gardens which I have often heard performed as interlaced with A. E. Houseman’s When I Was One And Twenty.

All this followed a reading by Andrew from his best selling anthology of last year. He writes and talks about life as a gay man in current society and his work often is a celebration of love. The commissioned poem he wrote was called Hymn (heard as ‘him’, too, of course) and Michael’s music featured a slightly distant, discordant piano that delighted me with its echoes of Tom Waits’ view of the beatnik life, being not unlike Andrew’s description of Manchester’s Canal Street.

Ian, very aptly, had focussed on The Maskews´ bequest that helps fund these festivals. His work was called Speaking Volumes and talked of Frank and Annie’s eyes ‘meeting across the crowded Catherine Cooksons’ and of ‘secret kisses behind the adult fiction.’

Both poets spoke fondly of Rochdale Literature And Ideas Festival, and together they brought a week of words to a fitting close.

THEATRE AT AN UNCERTAIN STAGE: