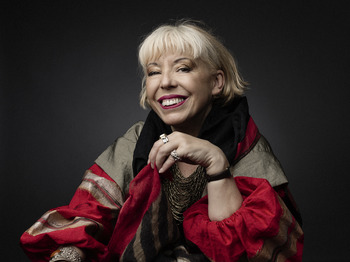 IN MY TROUBLED DAYS: Barb Jungr

‘Thank you for your lovely email.´  Barb replied to all across the arts chief officer Steve Cooke, who had used his page in The Rochdale Observer and his aata blog to ask artists to tell people how they were remaining creative during the lockdown period.

´I don’t know what I can contribute but I would like to share a press release with you for a track I made with the The Fourth Choir to herald a concert we will now have to postpone to who knows when. So when people asked us to release it anyway I was very happy. In My Troubled Days is now available and since the 10th April has been streamed on all the usual sites.´

It was in the Spring that John McDaniel and I decided to write something for the Gala performance we were due to perform in a couple of months later.  As I sat down and looked out of the window, feeling pretty low, the trees were in bud and there was blossom, so I went for a walk beside the river.

Everything I saw made my heart sing. Every flower and every ripple on the water that caught the sun, made my troubles seem so much smaller. When I started a recent collaboration with The Fourth Choir I proposed In My Troubled Days as something we might do together. John immediately wrote the choral arrangement and we recorded it in St. Silas The Martyr Church in Kentish Town just as our world was turning in a direction none of us had foreseen.

I played the recording to friends, and without exception they said, please, put this out now. So we have. I hope choirs everywhere will sing it. I hope people everywhere will sing it. I hope our world turns again and the sun shines again and the sad cafes, where no-one has the answer, will fill again. Meanwhile I watch the blossom and the neighbour’s bees and look towards the stars.

Now widely regarded as one of the greatest living interpreters of song, Barb Jungr’s work defies categorisation. From her early days recording in a studio in a bacon factory, to her current song-writing partnerships with Level 42’s Mike Lindup and John McDaniel and her work as a theatre lyricist, alongside her live performances, Jungr’s varied output of material continues to gain admirers.

The Telegraph describes her as ´electrifying….the top rank of jazz singers. A true musical alchemist, she is truly a marvel, who should not be missed.´

Judging from the special message on her web site Barb is reasonably optimistic that the arts will return to some semblance of normality and will find innovative ways to ensure growth and survival.

She is offering to perform gigs in a garden in an initiative that reminds of those live performance in people´s private homes that emerged as a platform for artists such as Janis ian a few years ago in the States.

The page also describes a rare recording of The Three Courgettes, now housed on  Barb Jungr Soundcloud. This is a recorded interview from almost forty years ago with a trio Barb played with at the time. Although her colleagues think they sound pretty much the same as they do today, Barb thinks she ´sounds younger, much. much younger. Innocent, one might say.

There is also exciting news that she and Simon Wallace have recently recorded Springsteen´s Dancing In The Dark, which they used to perform live some years ago. Simon took on production duties during the recording and their version is now available as a single. There is also a lovely lockdown promo video Simon has made which accompanies the release (27th June) on Kristalyn (catalogue number is KristaDB1) and Barb seems very happy with the outcome.

´It’s – well I think – beautiful,´ she says. ´It’s a song I’ve loved and a sentiment that somehow seems to fit these times. The little promo video for it can be found on my youtube channel.

Barb seems genuinely grateful to the fans who follow her work, and´in assuring us of her heartfelt thanks, appreciation and love, she  reminds us that  ´music and art are the blood of the soul´.

The Fourth Choir was founded in September 2013 by a group of LGBT + singers aspiring to sing classical and modern choral works to the highest possible standard. Led by the highly acclaimed Dominic Ellis-Peckham, one of the UK’s finest young choral conductors, The Fourth Choir aims to represents the LGBT + community on London’s world-class classical music scene and is, says The New York Times  ´an audaciously ambitious ensemble.´

Choral arrangements for In My Troubled Days are available online on the release date so that choirs worldwide can sing this together. The Track is written by: Barb Jungr and John McDaniel and performed by Barb Jungr and The Fourth Choir, with piano by Jenny Carr and bass by Dudley Phillips. The Choral Arrangement is by John McDaniel and the choir was directed in the studio by Dominic Ellis-Peckham. The song shows that Barb Jungr has not only created an incredible catalogue of unique and insightful interpretations of songs by some of the world´s leading songsmiths but is also is, herslef, a fine writer too.

NEW SOUND AND VISION AT CINEMA