Blog
You are here: Home1 / Blog2 / AATA3 / PROCESSION TO CALVARY by Andrew Moorhouse 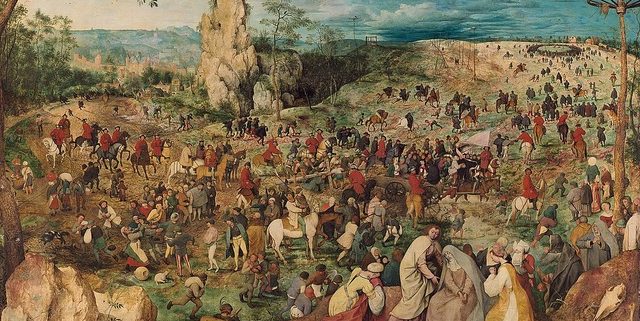 The Flemish artist Pieter Bruegel lived and worked in the middle of the 16th century. He died in 1569 at an uncertain age, his birthdate either unrecorded or lost to history.

‘An uncertain age’ may equally apply to the tumultuous times he lived through. In the 1520’s Martin Luther had been seminal in the Protestant Reformation which sought to renounce the long held beliefs, doctrines and, some might say, venal sins of Catholicism with their profitable parables of purgatory. In England, Henry VIII’s unproductive marriage to Spain’s daughter had failed to produce a male heir and led, ultimately, to England’s schism with Rome and the Catholic Church.

Protestantism spread north from Luther’s Germany to the low (nether) lands of Flanders whose city Antwerp was a trading hub and then the wealthiest city in Europe. The Holy Roman Empire, under the rule of the Spanish king Philip II, was not pleased with these developments, probably due to the fact that the Antwerp traders’ taxes were significant contributors to the Imperial Palaces and colonial misadventures of Madrid. Philip II tried his best to suppress protestantism by force. His troops persecuted the new followers of the reformation. These were brutal, sectarian, times where people suffered and died for their religious beliefs.

Bruegel, from 1555 a resident of Antwerp, was for a long time assumed to have been born into a peasant family, perhaps because of his emphasis of portraying peasantry in his work. More recently, art critics have said that due to the high intelligence of his work that he could not possibly have been ‘low born’. Of course this echoes the long running question; ’Did Shakespeare actually write Shakespeare’s plays and sonnets?’. Surely their works could only be painted or authored by people of ‘good breeding’ and other spurious notions.

Bruegel’s work was very different from that of the masters of the Italian Renaissance. Much of his work celebrates everyday life; children playing games, dancers at an open air wedding, a lunch break for harvesters,  woodcutters above a tempestuous sea on a gloomy day, villagers skating on a frozen river. W H Auden wrote memorably about ‘The Fall of Icarus’

“In Bruegel’s Icarus, for instance: how everything turns away

Quite leisurely from the disaster; the ploughman may

Have heard the splash, the forsaken cry,

But for him it was not an important failure; the sun shone

Water, and the expensive delicate ship that must have seen

Something amazing, a boy falling out of the sky,

Had somewhere to get to and sailed calmly on.”

In the painting, the mythical Icarus can barely be seen falling into the sea’s wide expanse, as the main focus of the work is the head down ploughman working his furrow, scratching his living from the soil while the son of Daedalus falls to his fate having got too close to the sun. But whose name do we know? Certainly that of the artist who created the work, but the long dead anonymous ploughman? The son of the man who designed the Labyrinth of Knossos?

Bruegel did paint religious and allegorical paintings as well, though these too are in the muted tones and pigments of low northern light rather than the brilliant ultramarines, vermilions, azurites, malachites and smalts that daubed the palates of the high summer of Italian Renaissance.

It is a large work which currently hangs alongside a good number of other Bruegels in the Kunsthistorisches Museum in Vienna. The painting is populated by well over 100 characters including: peasants, thieves, red coated troops on horseback, children fording a stream, a group watching an apparent standoff between an armed guard and a woman. In the foreground,  a small group console a sorrowful woman with prayers, tears and physical support. This group remind us of the three Marys and St John at the foot of Christ’s cross.

We read the painting from left to right, following the movement of the procession. On the far left is a healthy tree in full leaf. In the middle background is a large rock with an improbable windmill on the top. he rock is the rock of the first Pope, St Peter.  The windmill is representative of God, the maker of bread, the provider of manna  in the flight of the persecuted from Egypt. Bruegel also painted a work called  ‘Landscape with the Flight from Egypt’.

At the top right people circle around two crucifixion crosses with room for a central third. The circle of people echo a wheel laid flat on a tall pole at the far right of the painting. The wheel on the pole is an instrument of torture.  The tall, thin pole counterpoints the healthy tree which introduced our reading of the artwork. The persecuted would be tied flat on the wheel while still alive. They would be attacked by hunger, thirst and circling ravens until death.

In Greek mythology Prometheus was bound to a rock (see right) where an eagle would dine daily on his liver as punishment for bringing fire to the world. The persecuted of Flanders would not be, as Prometheus was, rescued by kindly Chiron, the centaur who abjured his immortality.

So, from our own myths, where, in the Bruegel, is our Christ? You have to look closely for him but he’s there, in the exact centre of the painting, on his knees, felled by the burden of the cross. He’s surrounded by people. Some appear to be trying to help. Some hinder him. Most pass by, keen to join the crowds at Calvary. These were the days when executions were spectacles to be enjoyed: the reformist peasant hoisted for the birds; non-conformists to the state religion burnt at the stake, their entrails dragged from their still living bodies, their genitals fed to the dogs; the kneeling queen headless and exsanguinate after her appointment with the French swordsman; the Son of God nailed to a cross, crowned with thorns, his side pierced by a blind centurion’s spear.

As with all the best stories, there is ambiguity in the tale and the reader’s perspective is all important in placing their own interpretation on it. The story Bruegel told in ‘The Procession to Calvary’ remains open to interpretation in an ever-changing world.

Nearly 500 years after it was painted and, following a suggestion from artist Jake Attree who has studied and been inspired by Bruegel’s work, I approached poet Michael Symmons Roberts to respond to ‘The Procession to Calvary’ for one of my Fine Press Poetry publications.

In a series of oil pastels Jake drew directly on the Bruegel in his own take on the full scale of the masterpiece. Jake’s characters are less defined than those in Bruegel’s, they are blurrier as if the story they portray is harder to interpret. Crucially, for me, the windmill is shrouded in cloud. What dominated the Bruegel is still there in the Attree but it is obscured, uncertain. Jake also chose to show the mourners around Mary and those in supplication praying for some sort of salvation. But he also extrapolated the story to reflect the distressingly current tale of people fleeing from persecution. In indeterminate landscapes we’re put in mind of the citizens of Aleppo desperate to escape bombardment directed by their own president; the peoples of the republics of central Africa trying to escape genocidal actions in uncivil wars rooted in the imperial actions of European nations; or refugees having to abandon the tyrannies of poverty and/or drought in the dry lands of Northern Africa. All hoping to find a better, safer life elsewhere.

One picture features two boxes which lie adrift in a sparsely populated  seemingly barren landscape. These boxes could be coffins or they could be shipping containers poised to become coffins for those seeking commercial transport into, what may turn out to be, a broken promised land. We’re put in mind of thirty-nine Vietnamese migrants perishing in a refrigerated lorry in an industrial estate in Essex.

Michael also took a contemporary approach focussing on modern day Manchester and, amid the hubbub of city life, the diversions of quotidian existence, the ´scatter plot of mis-directions: distractions, inducements to look in the wrong place´. These distractions may hold their own beauty, ´blossom like Absalom’s hair´, a full sky that is ´impossibly alive with joy´ but the containers are here too ´land-locked shipping crates´, their ´faded cargo-line logos, authentic, pixilated by real Southern Ocean winds.´

These land-locked crates have, in real life, been repurposed and now form the structure of a coffee shop under the concrete ugliness of the Mancunian Way. Writing that name I think of the ‘Way of St James’ or ‘Camino de Santiago’ and contrast the car bound commuters travelling to and fro beneath notoriously grey, rain filled, Manchester skies with the barefoot pilgrims walking under an un-obscured sun to Santiago de Compostela.

The name of the coffee shop is ‘Takk’ which in Icelandic and Norse, means ‘thank you’. The Takk coffee shop is, in Michael’s introductory words “a temporary, constructed world within a bigger world, which reveals itself as makeshift, also a ‘container’, but (Michael asks) what contains it all?” For Michael the answer is ‘thankfulness’ but, of course, your answer may be different. As for me, I’m still considering the possibilities. I remain ‘uncertain’.

words from a writer: RACHEL ABBOTT