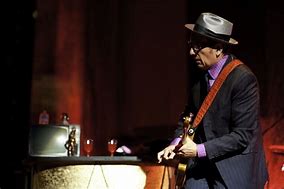 Late in 1978 a pal brought a new LP into the house for us to listen to. The cover showed a geeky looking guy in a charity shop suit and polka dot shirt behind a fancy camera on a tripod. The image says that he’s looking at you, he’s not asking you to shout a carefree ‘SEX’ to get you to smile, he’s serious, he wants to capture you as you really are.

Side one starts to turn. The stylus slots into place and there’s nowhere to hide. An, initially, unaccompanied voice snarls “I don’t want to kiss you, I don’t want to touch, I don’t want to see you ‘cause I don’t miss you that much” and you’re gripped. Or, at least I was. Gripped then and gripped by the words and music of Elvis Costello for the next 30 odd years. The record I was listening to, and which I quickly bought in Bradley’s Records at the end of The Walk in Rochdale and carried round town without a bag making the cover visible to show just how ‘with it’ I was, was ‘This Year’s Model’.

My days of thinking that Bowie was ‘the one’ (I’d even resorted to the leather jacket and a haircut ‘inspired’ by the sleeve shot of ‘Heroes’) were over. It was Elvis now. This Year’s Model was Costello’s second long player. I’d missed his first ‘My Aim is True’ when it came out, I’d even missed hearing his song ‘Alison’ (which, in time, became a very important song for me) when pop pickers failed to hear its unique take on lovelorn loneliness.

This Year’s Model, recorded with the newly formed Attractions, was certainly a furious record. Costello says it was inspired by The Rolling Stones’ Aftermath. My Aim is True had been produced by Nick ‘Basher’ Lowe in a dirt cheap studio and Elvis had been backed by a West Coast country influenced band called ‘Clover’. But My Aim is True had a song called ‘I’m Not Angry’ the playing of which made its title more than a little disingenuous.

I first saw Costello in concert in January 1979 at Oldham Civic Hall where he was supported by John Cooper Clarke (left). It was, without doubt, the most thrilling thing I’d seen in my tender years. The set list was taken from his new LP ‘Armed Forces’ but he also included some of the earlier songs that, by that time, I knew so well. Armed Forces included what was to be his biggest hit ‘Oliver’s Army’ a song written during a visit to Belfast about colonial misadventures and, in these early days of Thatcher, the ‘opportunities afforded’ by the military for the unemployed boys of the Mersey, the Thames and the Tyne, with not much in the way of other choices. A serious subject but with a joyous tune inspired by, believe it or not, ABBA’s ‘Dancing Queen’.

I’d become hooked. He toured constantly and I went to see him wherever I could. I remember three consecutive nights in Manchester, Sheffield and Leicester. I started going back stage after the show with him and he’d recognise me and we’d chat. On stage he was all anger, a newspaper interview had portrayed him as driven by ‘revenge and guilt’, talking to him after the shows he was gracious, thankful, affable, welcoming.

In concert amid the fury he’d introduce a song saying “This song was written by Burt Bacharach and Hal David” and do a wonderful version of ‘I Just Don’t Know What to Do With Myself”, or sing Percy Mayfield’s ‘Danger Zone’, or Prefab Sprout’s ‘Cruel’, or open a show by singing Randy Crawford’s ‘One Day I’ll Fly Away’, or presage his own ‘King Horse’ with a couple of verses of The O’Jays ‘Backstabbers’, or finish his own ‘Alison’ with a sequence of songs like ‘Your Cheatin’ Heart’ or ‘The Tracks of My Tears’ or ‘He’ll Have to Go’.

Costello provided my musical education. If he mentioned a band, or singer or songwriter I’d give them a go, sometimes I shared his love, sometimes not but I recognised and appreciated his generosity in sharing his enthusiasms.

His education had come from his mum who ran a record department in one of the big Liverpool department stores and had an encyclopedic knowledge of jazz, classical and the early 60’s ‘beat combo’ records. She also took her young son to the symphonic concerts at the Liverpool Philharmonic.

Elvis’ dad, Ross McManus, was a singer with the Joe Loss Band (writing that makes me think of my nan who was fond of saying ‘Joe Loss and his brother Dead Loss’) who was required to learn the hits of the day to perform with the Band. Ross used to bring home many records including acetates of the early Beatles’ singles. Ross also played the trumpet and, in the early 90’s when the band no longer existed, he’d tour the Working Man’s Club circuit singing songs and playing his trumpet. I was lucky to see him at the Wellfield Club in Rochdale in the early/mid nineties when he sang a number of his son’s songs.

Ross and the Joe Loss Band had performed at the Royal Variety show in the 1963 when the Beatles were on the bill as was Marlene Dietrich who was accompanied by Burt Bacharach. Ross took Elvis (then just Declan, his birth name) along to see the show.

Costello’s enthusiasm for music has lead him to make records across many styles, the Stax and Atlantic Records influenced ‘Get happy!!’, the country covers record ‘Almost Blue’, the late night jazz of ‘North’, the classical score, ‘Il Sogno’ he wrote for ‘Midsummer’s Night’s Dream’, the Great American Songbook LP, written with Burt Bacharach, ‘Painted From Memory’, the New Orleans influenced ‘The River in Reverse’ written with Alain Toussaint, the ‘trip-hop’ of ‘Wise Up Ghost’. All the records have many things to recommend them. Some, I believe, are essential for any serious listener to music. These are the top five in my opinion;

Get Happy!! (1980) – Written at a time of deep disgust with himself and the behaviours brought about by the demands of ‘pop stardom’ it contains 20 concise and consistently excellent soul records including the quite wonderful ‘mea culpa, mea culpa, mea maxima culpa’ self- punishment of Riot Act. In Elvis’ words ‘A record to dance to but you wouldn’t want to live there’.

Imperial Bedroom (1982) – recorded in London with the Beatles’ engineer Geoff Emerick producing and with a little help from George Martin the first track ‘Beyond Belief’ lives up to its title. Imperial Bedroom covers a very wide range of musical styles. Costello’s lyrical genius and musical understanding are beautifully combined – ‘Man Out of Time’ is another piece a splendid self-disgust, ‘Almost Blue’, a song that Sinatra should have done at the peak of his powers, ‘Town Cryer’, a lyric worthy of Smokey Robinson with a soaring string arrangement to complement it.

This Year’s Model (1978) – as exciting a record as you could wish to hear. Pete Thomas’ drumming on ‘Lipstick Vogue’ is miraculous. Still thrilling 40 odd years later.

The Delivery Man (2008) – recorded in Oxford Mississippi not far from the crossroads where Robert Johnson sold his soul to Mephistopheles this is a swampy mixture of country/soul with high points including The Judgement, written for Solomon Burke, ‘There’s a Story in your Voice’, a duet with an apparently half-cut Lucinda Williams and ‘Either Side of the Same Town’ written with Jerry Ragavoy and for Howard Tate who was going through hard times.

Costello’s autobiography ‘Unfaithful Music and Disappearing Ink’ is a fantastic read. The sections on his dad’s passing are marvellously and very movingly written.

FUN AT THE FAIR