Blog
You are here: Home1 / Blog2 / Music3 / SPEED OF THE SOUND OF LONELINESS 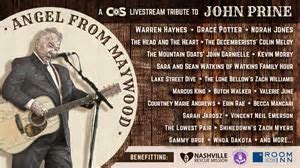 SPEED OF THE SOUND OF LONELINESS

It is more than forty years since John Prine’s self-titled debut album was released. That means I have been listening to his music for two thirds of my life and have never tired of it. He is high among the pantheon of (mostly American) singer-writers who have given me codes to live by throughout most of my life. Writers like Townes Van Zandt, Guy Clark and John Stewart so often provided me with ´a star to guide her by´ whenever I was in danger of running my ship aground. I often used their lyrics as examples, in the creative writing groups I facilitated, of great poetic writing. John Prine´s song Sam Stone, with its incredibly painful and evocative imagery, was on every syllabus I ever delivered. And now he´s gone: to complications of coranavirus, and tributes pouring in from his peers and contemporaries. It is time to wander some of the sidetracks and detours of John Prine. Come join us, there´s good music along the way.

John Prine´s debut album included incredible songs like Illegal Smile, and Sam Stone, with that amazingly evocative line, ‘there’s a hole in daddy’s arm where all the money goes,”  that so impressed Bob Dylan.

Such a promising debut album immediately had Prine dubbed, (along with almost every new singer-writer coming down the tracks) as ´the new Dylan´. Of all that generation that immediately followed Dylan, including people like Steve Goodman, Louden Waimnwright and Jesse Winchester and even though that generation also included Bruce Springsteen, there is room for the argument that Prine drew a body of work comparable to any of them.

Also on the eponymous album was Angel from Montgomery, with its ‘poster of an old rodeo’ and Paradise. The album also featured Hello In There, a song about aging, that was later covered by numerous artists, and that remains as relevant today, in these lockdown times, as it was then.

Many critics and Prine fans came to view the release of 1978’s Bruised Orange as a creative highpoint. The Steve Goodman-produced album gave listeners cuts such as The Hobo Song, and Sabu Visits The Twin Cities Alone, and the title track.

Prine continued writing and recording albums throughout the 1980s and formed his own record label, Oh Boy Records. His songs continued to be covered by other artists; the country super-group The Highwaymen recorded The Twentieth Century Is Almost Over, which had been written by Prine and Goodman. As mentioned elsewhere on this Sidetracks and Detours all across the arts blog, the song also became part of our staple stage act in Lendanear, and we, too, covered it on our own debut album.

Steve Goodman died of leukaemia in 1984 but Prine perpetuated his friend´s legacy as he continued to perform many of Goodman’s songs, such as “My Old Man,” throughout his career.

Goodman and Prine were both superb laugh-out-loud raconteurs, and you really should hear Prine´s introduction olive albums and in concert to The Oldest Baby In The World written about the wife-of- the- time of his band member Donny Fritz. It is a monologue of Bob Newhart quality in both scripting and delivery, and Prine´s live albums and performances always showed him to be a master of comic timing.

There is a story he told regularly about the home of his guitarist Donnie Fritz. The house, bought out of Donnie´s huge earnings as one of the most sought after recording session players of the time, had been decorated in somewhat tasteless fashion by Donnie´s then wife. Prine´s anecdote is about Donnie showing him around the place the first time John visited, and constantly apologising for the furniture and art works his wife had bought. It is a classic little comedy sketch, and even when listening to it on record, repeatedly, you can see the sparkle in John´s eye as he recounts the story.

In early 1998, Prine was diagnosed with  cell cancer on the right side of his neck. He had surgery to remove a substantial amount of diseased tissue. This was followed by six weeks of radiation therapy. The surgery altered his vocals, and added a gravelly tone to his voice.

Five years after being diagnosed, Prine was given a BBC Radio 2 Lifetime Achievement Award for song-writing and that same year was inducted into the Nashville Songwriters Hall of Fame. The following year saw his song Sam Stone covered by Laura Cantrell for the Future Soundtrack For America compilation.

Prine´s best loved song is, arguably, The Speed Of The Sound Of Loneliness, (Nanci Griffth delivered a great recorded cover) though many might claim That’s The Way The World Goes Round or even That’s What They Invented Dancing For.

Although I loved John Prine´s songs from the get-go, I didn´t manage to see him live in concert until his UK tour in 2014. We went with our friends Harry and Catherine Coward to Bridgewater Hall, I think, in Manchester. We were slightly worried because Harry and Catherine were joining us on our recommendation and we weren´t too sure how they would find him.

There had been plenty of rumours circulating about his poor health, so I was slightly concerned about the quality of performance but hell, it was John Prine and I feared even then that this might be our last opportunity in Britain to hear a live performance by one of the great American poets and lyricists of the twentieth century. Sometimes only a cliché will suffice. He brought the place down and the four of us stood in ovation.

I love the work of John Prine as much for its sense of fun as for its profundity. No matter what the subject, John found the humour in it. His songs of blue collar America revealed his deep empathy for the characters he created, such as Donald And Lydia, with their love affair being narrated in a compassionate manner.

John Prine created a body of work that should be read as a textbook of Modern American History. His account of ´paradise lost´ about land being raped for coal was years ahead of its time in addressing our planet´s ecology, and so beautiful is that song, Paradise, that it was recorded by The Everly Brothers and treated to their unique sibling harmonies.

I know how much I revere the songs of the late John Stewart and the poetry of ´the late, great´ Townes Van Zandt and that their music matters to me is a given. Somehow, though, every time I play a John Prine track I find myself being reminded that all music matters to me …but his, perhaps,… matters more than anyone´s.

John Prine died of Coranavirus complications on April 7th 2020, aged 73. The tributes from the likes of Springsteen and Dylan have been generous and fulsome and I have always thought of him as somewhat ahead of his time.

There was a time when Terry Wogan popularised the idea of lyrics being, either deliberately of erroneously, misheard by radio listeners and there can be few of my generation who don´t remember the fun Wogan and his audience had with the lyrics Kenny Rogers´ material.

You Picked A Fine Time to Leave Me Lucille, (or Loose Wheel) as Wogan called it was a prime source for this humour but Prine used to also tell a similar, somewhat self-deprecatory tale about one of his own songs, which also happened to be one of my favourites.

According to Prine ´a little old lady´ came over to him during the interval of one of his shows and asked if he would play a request. When he asked her what it was she said it was ´that one about the happy enchilada.´ Prine was puzzled and asked her if she was sure because he didn´t think he´d ever written a song about a happy enchilada.

´Oh, yes, I´m sure,´ she replied and sang him the chorus of ´it’s a happy enchilada and it thinks its gonna drown.

Later in the evening, half way through John´s second set he introduced a song by saying it was for the lady he´d been talking to during the interval.  He then went into the song, a piece about how some of us have a tendency to make a drama out of a crisis, and he sang That´s The Way The World Goes Round, with its catchy chorus of ´it’s a half an inch of water and you think you´re gonna drown, but that´s the way the world goes round.´

Without John Prine the world won´t ever go round in quite the same way.

WE ARE THE MUSIC MAKERS: ENQUIRY INTO MAXIMUM ENSEMBLE. edition number 10...