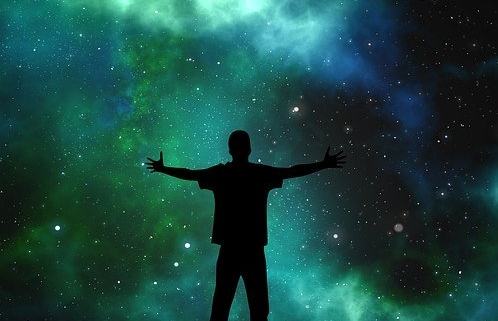 Whispers In The Wind

Lanzarote has so little light pollution and so much silent, open countryside that we are afforded wonderful views of meteors and  falling stars all across the constellation and, almost on a nightly basis, are able to follow Tom Paxton´s advice to ´listen to stars spreading rumours.´  We seem able to hear in the whispers of the wind, the soft voices of stars telling tales for us to pass on to others.

David Spriggs, for instance, is an artist we have recently heard being well spoken of. He works primarily in phenomenological experience; he creates stunningly convincing illusions of airy, voluminous objects that we enter visually. This process relies upon the way we interpret vision, and exploits our Gestaltian susceptibility to illusion conflating disparate parts into an actualized whole. Holocene’s layering of warped rectangular forms presents a hyperbolic modernist reduction of the whole of human existence into one infinitely extended, anthropic abstraction.

Those who might not instantly understand what the above text by J. Hampton is telling us might soon be able to view for themselves the works he describes.

David Spriggs, an English born artist who has lived in Canada since early childhood, has shown his work all over the world and this international artist is rumoured to be bringing to the UK later this year an exhibition of the work Hampton tells about.

His web site details an impressive and intriguing body of work, so it might be worth making a mental note of the name David Spriggs and keeping an eye out for wherever he exhibits.

We here at all across the arts will try to keep you informed of venues and dates as we receive them.

Can you hear that? I´m sure I heard somebody rapping a rap in the background there. If so, they should contact radio presenter Steve Bewick, who is looking for rap artists to include on his weekly Hot Biscuits programme on FCUM Radio.

Mr. Bewick has been massively enthused by a recent trip to Tel Aviv where he checked out a local arts scene that revealed jazz music being fused with rap elements, and he is keen to trace this development in the UK too.

From what we hear Steve has had a busy time in Israel, writing his own free verses inspired by the beat poet generation he so loves, and also being busy sketching and painting.  Having landed back in the UK, he will no doubt be feverishly preparing for his own forthcoming arts exhibition. As soon as we hear any whispers of dates and venues, we will share them with you, of course. Meanwhile, Steve has just joined the newly formed Bury Jazz Society whilst he continues to deliver established and emerging artists from that genre on his radio show.

Giles Peterson is an artist currently receiving air play on Steve´s show. Steve describes him as ´the John Peel jazz today.´ You can catch Steve on Wednesday evenings and no doubt you will be able hear some of Peterson´s work too. However, Giles is not the only one enjoying some airplay at the current time.

In the cathedral quiet out here under the stars of Lanzarote you can hear not only The Beatles and The Byrds and The Beach Boys humming if you Lendanear, but also you can in fact hear the duo of that name is on the radio with them.

My life-long song-writing partner, Colin Lever, has been working to restore over forty songs that he and I thought we had lost in the fade-away diamond time many blue moons ago. After some re-recording in the studio and some restoration to the tracks we recorded forty years ago we´re now on the radio for the first time since the radio was known as the wireless.

A country dj called ´the pink cowgirl´ has been playing our songs to her listeners in America and Australia and Ireland. Meanwhile, out here, under the wide Lanzarote skies, I´m sure I can hear those songs playing from border radios way out of range. Just last week, coming out of CountryJoe Radio, across the ocean from Wyoming I heard my partner´s passionate delivery of Southern Comfort and his more plaintive rendition of Last Boat Home. Back in the day, whenever we were played on the wireless it would be in a folk programme in the company of the likes of The Spinners, Mike Harding and The Wurzels.

The other night, though, the good folk in Wyoming heard us in a programme that also played Ozzy Osbourne and Toto. Occasionally I drive out among the stars when the night is ours and as I negotiate the shadows and sands of Fire Mountain I think I catch a glimpse of The Last Priest In The World seeking redemption or hear the faint echo  of Jack Easy, the concertina man, playing stately dance music. I have always this was just my imagination playing tricks on me but now we have had confirmation that our songs being played on the radio; all of them, including the four songs for Sarah and one more for the road, can be heard. And then, my there´s a Monster coming over the hill, as I pick up this island´s FM radio station and AJ the DJ is playing Rara Avis and a gentle whisper is calling me away.

Perhaps even our friend Jenny Roche is listening to these songs too, as she continues her work as a freelance journalist and comedy writer in the Borough of Rochdale, with her own pieces in this month´s edition of Writing News Magazine.

She advises us to listen to The Drabblecast, which is a weekly audio fiction pod-cast that carries elements of fantasy and horror fiction. Emerging from a successful crowd-funding campaign, it pays subsequently selected and published contributors for features of between 500 and 4,000 words. www.drabblecast.org )

Aspiring and freelance writers should also check out this March edition of WM for Jenny´s news about Words Of Unity being sought for a new publication by Global Acts Of Unity. She also informed us that The Science Fiction And Fantasy Writers Of America have bestowed an award on Lois McMaster Bujold, author of The Vorkosigan Saga.

Jenny Roche looks further afield on the Global Fiction Market, and that pun of afield, might lead you to think of furry animals. If so, that would be opportune, as Jenny reports that Zooscape are looking for stories that they say ´must feature an anthropormorphic animal figure.´ they will pay for published stories of up to 10,000 words.

She speaks too of a ´frontier opportunity for new poets´ at a publishing house seeking to provide new and exciting challenges to writers who have not previously had published a full length piece of work.

Writing Magazine features in each month´s publication news from Jenny and other regular freelance contributors about writing opportunities. The publication is available on subscription or on order from newsagents and outlets like WH Smith´s.

An English writer, a resident for nearly twenty years now on Lanzarote, and a member of the erstwhile Lanzarote Creative Writing Group (LCWG) has just published his first book on Amazon and has been receiving positive reviews. We will bring you an interview sometime in the near future with he who does not yet want to be known.

LCWG disbanded when its facilitator, Sue Almond, re-retired back to the UK and another former member is also about to move off the island. That does mean, though that there is an opportunity for somebody to start a new group, recruit members, and create new text and publications. Is there anybody out there?

Speaking of writing the night stars are also conspiring to commemorate the hundredth anniversary of the death of one of Lanzarote´s most loved poet. Victor Fernandez Gopar, wrote so many poems about the beautiful and important salt pans here on the island that he became known as ´EL Salinero´ and it was with that sobriquet that he has previously been immortalised when the name was given to the main theatre in our Capital city of Arrecife.

That venue has already staged a production called ‘Verses of Salt’ celebrating his life with leading folk lore group Los Sabandinos paying their own tribute by putting his verses into songs.

Now the rumours in the night sky are telling us that soon a smaller, more intimate, commemoration will be held in tribute to Víctor Fernández Gopar that aims to serve as recognition of the work and memory of the poet born in Las Breñas in 1844. A statue in his honour will be unveiled very soon in the small town of his birth, and we have no doubt this will be a typical Lanzarote occasion of dignity and formality and partying. The commemoration might well go on long into the night in a village which dreams under a blanket of stars and it might just be that amongst the rumours of the night, if we listen closely, we could imagine the ghost of Gopar reading one of his poems. The singing groups have been booked and the paella is being prepared as we speak.

And as we have now mentioned singing groups we should add that sometimes the stars not only spread rumours, but seem to join with us in singing them in harmony as they do so. That is how we heard that Lanzarote´s Voices Choir are looking to deliver a summer concert to complement their much loved Christmas concerts.

We´ll keep you informed of developments and all you have to do is Lendanear.

CONCERTS IN CAVES AND CONVENTS