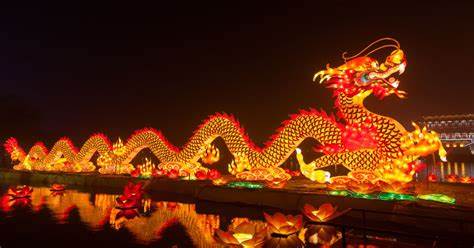 THE RAT LOOKS ON

a quick catch up

The Year Of The Rat is the first sign in the Chinese zodiac cycle. According to the Chinese zodiac story, in the competition held by the Jade Emperor to decide the zodiac animals, the quick-witted rat asked the diligent ox to take him on a ride to cross the river and jumped down before the ox crossed the finishing line, so the rat won the race and became the first of the zodiac animals.

It was celebrated in the City of Manchester on Sunday 26th January 2020 marking the arrival of the Chinese New Year: the year of the rat. And what celebrations they were!

The sign for parking, next to the giant inflatable Buddha, read ‘Remember to pay.’ In truth, though, there was no room for parking today as dragons roamed the streets and gathered to announce their presence by dancing in the China-Town car park.

A multicultural audience were entertained by speeches from local and national dignitaries, acrobatics, dancing, music, and extracts from Chinese opera, juggling and even martial arts. Street food was available in abundance, as was good humour and a fraternal sharing of hopes of better times for the New Year. With the virus that has erupted in China recently, and seems so threatening at least until an antidote can be concocted, these wishes are perhaps more fervent this year than ever before

To help those wishes come true a ritual was played out at the entrances of cafes, restaurants and the massage and tanning parlours of The Tibb Street area. Drummers drummed, cymbals clashed, bells rang out and even the dragons danced.

On their return to the gathered children, parents, grandparents and general revellers on the streets they were greeted by an explosion of red dragon snaps These filled the air with sound, flashes of light and smoke to the cheers of attendees.

Evil spirits were surely driven from the streets and from the entrance to the said establishments to make way for the new year promises of the rat.

The finale came as when above us, the dark Manchester sky became a giant canvas for thunder claps and flashes of light of many colours. Subtly at times, and at others wild with sound and flare, The New Year had arrived in Manchester’s China Town. Gong hei fat choy!

Meanwhile, as we confirm hat it is indeed a small world that sees the one culture being celebrated in the home of another, and a contagious disease becoming global almost before our eyes. We also noticed an interesting lead article from Steve Cooke in this week´s Rochdale Observer.

Steve was talking about a West End play that is about to be beamed live from London via a cinema screen to an audience in The Middleton Arena in Rochdale in the North West of England. James McEvoy plays the central character of Cyrano de Bergerac. The star of my own favourite films, Atonement, takes on this eponymous role in what is an inventive new adaptation of Cyrano De Bergerac in this latest of what is proving to be a popular series of live screenings from The national Theatre.

Cyrano is man as dangerous with a pen as he is notorious in combat, would be a man complete if only he could win the heart of his true love. Anyone who has ever seen a poster for the film or play will know that Cyrano´s main impediment to love is the size of his nose, which is nearly as his huge love for Roxanne. Even society, in his somewhat narcissistic times, seems set against him, but Cyrano wonders if his way with the written way might somehow turn her heart. The production itself is of a master class by Edmond Rostand, adapted by martin Crimp and directed by Jamie Lloyd who also directed the excellent Betrayal. The play is enlivened by words attributed to Cyrano, celebrating his powerful and resonant resistance against the odds as he dares society´s snobbish elements to prevent those words from warming Roxanne’s heart.

The play runs at The Playhouse Theatre, London until February 29th and shows at the Middleton Arena, for one night only, on Thursday February 20th from 7.00 pm to 10.00 pm for an admission price of only £10.00

Another frequent contributor to all across the arts UK is Dr. Joe Dawson, who shares coverage of classical music events in the region with Graham Marshall, who also contributes to our Lanzarote branch.

Dr. Dawson this week has reported on the first meeting of 2020 of The Friends of Rochdale Art Galleries, (Frag). The session was brightened and enlivened, the writer tells us, by an illustrated talk by Todmorden based artist Barry Cook. His talk was called Under The Sun and his art form and stylistic development clearly emanated from his fascination with the world of nature, particularly that of birds.

At his early output of work was what he called of ´representational illustration, and somewhat ´cartoon-like, he attended an avant garde course at art college, and then seriously developed his skills, honed his craft, whilst working as a primary school teacher.

His catholic love of art saw him draw from an eclectic range of renowned artists including Miro, Picasso and Chagall as well as Bottocelli. He developed from that impressive list his own style of water colour, through use of pencil, guache and inks on paper, producing what he himself recognises as ´works like a child might have painted but, of course, couldn´t !´

For examples of his vivid work visit www.barrycookartist.com

Dr. Dawson reminds us that ´the beauty of revelatory talks like this is as much in glimpsing the motivation and creative processes at work in creative personalities as it is in seeing the end `product.´

Frag meets at the second Tuesday of each month at Touchstones Arts and heritage Centre from 12.45 to 1.45pm.  The members form a delightful group and I have enjoyed delivering a couple of poetry based talks to them a couple of times myself.

I should say that the beauty of giving revelatory talks in such a setting lies in the inspiring art work around the speaker and how that art work itself seems to take part in the conversation.

It is always a pleasure to join kindred spirits in both supporting and complementing both regional and national artists and their arts, and annual membership0 of Frag is only £10-00.

The Manchester Evening news outlet of all across the arts also lists in Steve Cooke´s what´s on column details of Toad Lane weekly lunch time concerts at St. Mary´s In The Baum, Rochdale, talks given at Castleton Literary and Scientific Society, and The Jazz On A Sunday events among any of the scores of other arts events that take place in the Borough of Rochdale.

Next time you visit the birthplace of Gracie Fields, with the notion of visiting the impressive stature of her on The Butts, check out all across the arts page in The Rochdale Observer to see what else might be going on.